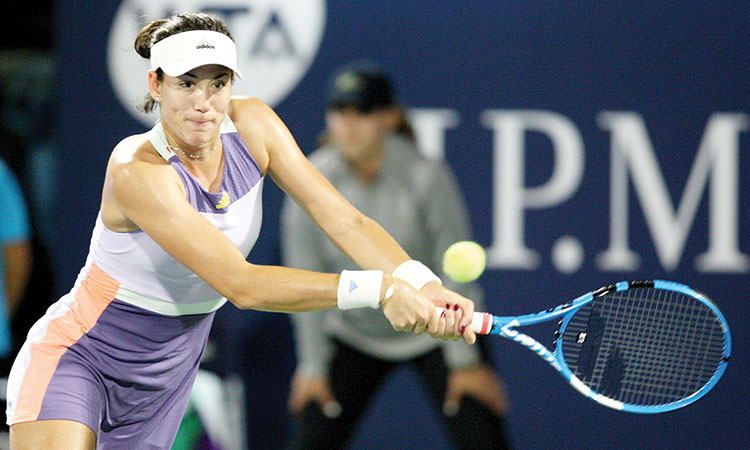 Garbine Muguruza in action against Kim Clijsters during their first round match of the Dubai Duty Free Tennis Championships on Monday. Kamal Kassim / Gulf Today

The ninth seed Muguruza needed one hour and 37 minutes to beat the Belgian, who was making her second comeback to professional tennis.

Four-time Grand Slam champion Clijsters was back on court for the first time since the 2012 US Open, after nearly eight years.

The two-time Grand Slam champion Muguruza broke her in the very first game and later went on to win the first set comfortably 6-2. Clijsters, who was playing in Dubai for the first time in her career, tried hard in the second set. She fought back from a double-break down in the second set to take a 5-4 lead.

Two-time semi-finalist took the set to a tie-break and took victory on her second match point to deny Clijsters a dream return to the WTA Tour.

Rising Arab star Ons Jabeur fought a hard battle to knock out Alison Riske and set up a second round clash with top seed Simona Halep.

The top-ranked Tunisian took more than two hours to battle past her higher-ranked rival from America 7-6, 1-6, 6-3 at the Centre court.

World No.18 Riske, who was making her second appearance at the tournament, got a break in the very first game of the opening set and took a 2-0 lead.

Jabeur bounced back with a break in the fourth to draw level 2-2. Later, both the players failed to get any break and finally the set was decided 7-3 by a tie-breaker in favour of the Tunisian.

Riske fought back in the second set and with the help of two breaks raced to a 5-0 lead. The American took the set 6-1.

Backed by sizeable Tunisian fans, Jabeur broke Riske in the eighth game of the decider and sealed a place in the next round.

Happy with the support from the crowd she received during the match, Jabeur said: “I was thrilled to see so many Tunisian flags here. Hopefully, the crowd will come again and cheer me during my second round match,” said the World No.45. It was a tough match. It’s tough to win against such players. She didn’t give me any easy balls at the beginning, so I had to go and win my point. She has such flat and tricky shots, it was kind of tough for me to really spin a little bit and put the ball in.”

Jabeur scripted history last month when she became the first Arab female to reach the last eight of a Grand Slam at the Australian Open.

Jabeur, the highest-ranked Arab woman in history, reached a career-high 45 this year.

“I have been proud of what I have achieved as a player particularly since the past few months. I am here with a lot of confidence,” she added.

Selima Sfar is the only other Tunisian woman to win at a Grand Slam after she reached the second round at Wimbledon, Roland Garros and the US Open in the 2000.

Anisimova fought back after losing the closely contested opening set. She jumped to a 5-0 lead in the second set and a 3-1 lead in the third; it appeared as if she was on her way to victory. But Strycova dug deep and surrendered just four points in the final three games.

“It wasn’t really a great match from both sides,” said Strycova.

“It’s really tough conditions over here and the ball is flying everywhere. But I was really happy to keep the ball in the court. It was a really tough match for me and I’m very happy to be in the second round,” she added.

Qiang Wang, who stunned Serena Williams in the third round at the Australian Open, failed to advance beyond the first round as she was sent packing 6-3, 6-0 by Elise Mertens.

Women’s Singles Round of 32

Women’s Doubles Round of 32