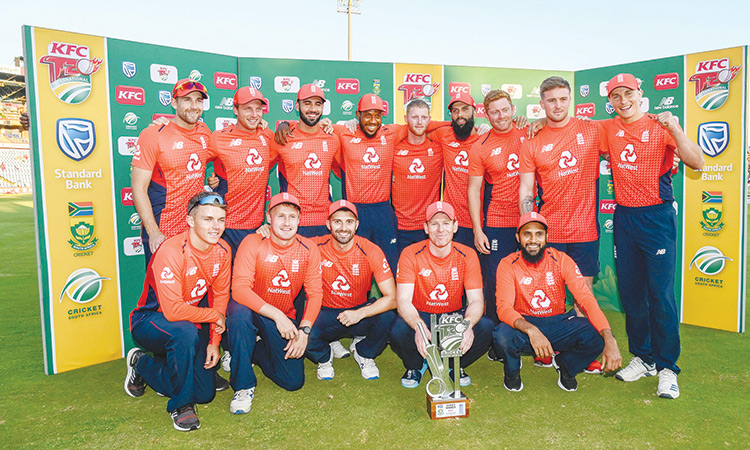 England cricketers pose with the trophy after winning the T20 series against South Africa on Sunday. Reuters

Morgan slammed seven sixes in an innings of 57 not out off 22 balls as England chased down South Africa’s 222 for six with five wickets and five balls to spare.

“It’s a nice note to leave this tour on,” said Morgan.

But Morgan had sympathy for the bowlers on a day when a capacity crowd were peppered with 28 sixes as the batsmen took advantage of a true pitch and the thin air of the South African highveld.

“It was a helluva game,” said Morgan.

“You have to commend both sides’ bowlers. It’s not the easiest ground to bowl on, especially with a wicket like this.”

Heinrich Klaasen, playing in his first match of the South African home international season, hit 66 off 33 balls for the hosts after Temba Bavuma (49) and captain Quinton de Kock (35) hammered 84 for the first wicket off 46 balls.

“When any side posts 220 it’s a tough ask but going back to the 2016 World Cup with this group of players we chased down 230 against South Africa in Mumbai. So we always had this belief,” added Morgan.

Jason Roy was out early but Jos Buttler (57) and Jonny Bairstow (64) put on 91 off 50 balls for the second wicket to put England in a strong position.

But 78 runs were still needed off 38 balls when Dawid Malan was fourth out with the total on 145.

Ben Stokes joined Morgan and the pair added 61 off 27 balls before Stokes was caught on the boundary with 17 still needed off 11 balls.

Morgan hit two sixes off successive balls from Lungi Ngidi in the same over and the contest was effectively ended.

Morgan was named man of the match and man of the series after pipping opposite number De Kock as the leading run-scorer in the series.

“We knew it would be a high-scoring game but we’re a bit disappointed not to get over the line,” said De Kock.

“We had mixed emotions (after the first innings), the guys were confident but we knew it was a great wicket.” South Africa won the first game by one run before England levelled the series with a two-run victory.

It was the last match for England after a tour in which they won a four-match Test series and shared a one-day series.

South Africa will be back in action on Friday when they play Australia in Johannesburg in the first of three Twenty20 internationals, which will be followed by three one-day internationals.