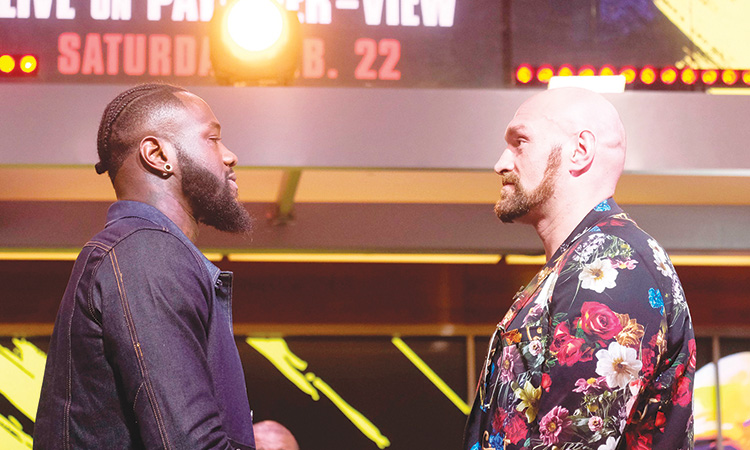 The 12-round battle between Tyson Fury (right) and Deontay Wilder for World Boxing Council crown is a rematch of a thrilling 2018 draw at Los Angeles. File / Agence France-Presse

Britain’s Tyson Fury vowed to deliver a career-best performance in his upcoming heavyweight title rematch with American Deontay Wilder, expecting a “war” in their Feb. 22 showdown at Las Vegas.

The 12-round battle of unbeaten fighters for Wilder’s World Boxing Council crown is a rematch of a thrilling 2018 draw at Los Angeles.

Fury was knocked down twice by Wilder in the first fight but the 31-year-old Englishman plans a more aggressive approach for the rematch.

“Never have I been as ready and focused for one fight as I am for this fight,” Fury said in a conference call Thursday. “You’re going to see the best Tyson Fury that Tyson Fury can be.

“If I beat Deontay Wilder, I’ll be the best heavyweight of my era, standing alone,” Fury said.

Fury backed up prior comments saying he would knock out Wilder in the second round, saying he felt he needed a knockout to keep the outcome from the hands of the judges.

“Won’t have to wait long to find out, will we?” Fury said. “We’ll see if I’m man enough to back it up. My own destiny lies within my own two fists. I’ll be letting them fly very aggressively.”

“Everybody would have to recognize him as one of the great heavyweight champions of all time,” Arum said. “He definitely will belong with those immortals.”

Fury says he learned from the first fight that he must press the attack when he senses weakness from Wilder.

“The mistake I made last time was not making him pay when he was hurt. This time when I get him hurt, I’ll throw everything but the kitchen sink at him and he won’t know what hit him,” Fury said.

“I learned he can be hit and hurt quite regularly. That’s the biggest thing I learned from fighting him. He’s a one dimensional fighter and I’m going to prove that. I took his best shots and fired them back into him. He’s a one trick pony. He’s a knockout artist... but he couldn’t finish me. It’s not when we get put down. It’s what happens when we get back up and keep moving forward.”

Wilder’s speed plays a bigger role in his knockout blows than his power, Fury said.