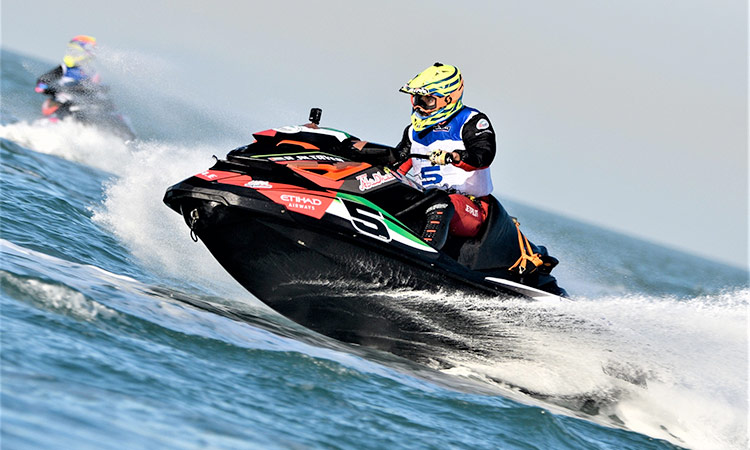 Team Abu Dhabi’s Rashed Al Tayer powered his way to an emphatic victory in the Grand Prix of Kuwait on Friday to launch his title challenge in the 2020 UIM-ABP Aquabike World Championship.

The Emirati rider followed up his first pole position success in the series 24 hours earlier by winning the opening Runabout GP1 moto of the season in convincing style on a dramatic day of racing.

Team Abu Dhabi’s second victory of the day arrived from reigning world freestyle champion Rashid Al Mulla who took the first moto less than a month after breaking his right shoulder in training, having missed the previous day’s qualifier because of technical issues.

Surging into the lead from the start, Tayer was never challenged as he raced away to win by 12.77 secs from last year’s championship runner up, Denmark’s Marcus Jorgensen, with Kuwait’s four-time world champion, Yousef Al Abdulrazzaq, another 39 secs away in third.

With Saturday’s second Runabout GP1 moto to follow, Tayer is seeking to repeat his overall Grand Prix triumph at last season’s opening round in Portugal.

Aiming to mark her Team Abu Dhabi debut with a win after securing pole position in Ski Ladies GP1, three-times champion Emma-Nellie Ortendahl had to settle for second place behind fellow-Swede Jonna Borgstrom in the first moto.

Ortendahl looked like taking victory in the second moto after a spectacular battle with Borgstrom before a collision near the finish put both riders out of the race, presenting the win to France’s Jessica Chavanne

There was frustration too for Victory Team’s defending Ski GP1 champion Kevin Reiterer who won the first moto by 37.69 secs from Norway’s Stian Schjetlein but then fell victim to mechanical problems as Spain’s Nacho Armillas won moto 2 from Frenchman Mickael Poret.