Sinner and Bedene advance into quarters as Medvedev crashes out - GulfToday

Sinner and Bedene advance into quarters as Medvedev crashes out 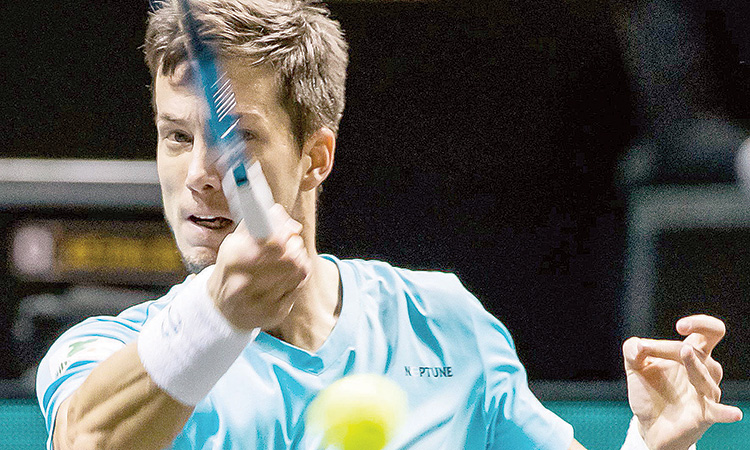 Jannik Sinner struck 27 winners and closed out his first top 10 victory in style at the Rotterdam Open on Thursday. The 18-year-old wild card overcame World No. 10 and 2017 runner-up David Goffin 7-6(7), 7-5 and will next play Pablo Carreno Busta of Spain in the quarter-finals.

Sinner clinched the first set, which lasted 68 minutes, with a forehand — his 15th winner — on his fifth set point in the tie-break. The pair had exchanged service breaks at the start of the match. Fourth seed Goffin took a 2-0 lead in the second set, but 2019 Next Gen ATP Finals champion Sinner recovered with his solid groundstrokes and broke for a 6-5 lead when Goffin hit his seventh double fault.

Elsewhere, Andrey Rublev extended his excellent start to the 2020 ATP Tour season by recording his 13th win in 14 matches. The seventh-seeded Russian improved to 3-0 in his ATP Head2Head against Alexander Bublik with a 7-5, 6-3 win over 80 minutes, which included winning five straight games from 4-5 in the first set to a 2-0 lead in the second set.

Aljaz Bedene recorded just the second Top 10 victory of his career. The Slovenian held firm on serve in the first set en route to overcoming World No. 6 Stefanos Tsitsipas 7-5, 6-4 in one hour and 33 minutes for a place in the quarter-finals. He’ll now meet Felix Auger-Aliassime for the first time.

Bedene saved five break points in the first set – two in his first service game and three at 3-4 – before winning the final 11 points to take the 53-minute opener. Second seed Tsitsipas unravelled after leading 5-4, with Bedene at 15/30 on his serve, and was broken to love at 5-5 when he struck a forehand wide.

Bedene gained a second service break at 1-1 in the second set, when a crosscourt forehand hit the net and bounced over Tsitsipas, who was en route to the net. World No. 52 Bedene closed out with a brilliant forehand down the line – his 20th winner of the pair’s first ATP Head2Head meeting.

Tsitsipas, who recovered from a set and break down against Hubert Hurkacz in the first round, drops to a 3-4 record on the season. Bedene beat his first Top 10 player in May 2018 at the Internazionali BNL d’Italia (d. No. 7 Kevin Anderson)

Top seed Daniil Medvedev crashed out of the tournament on Wednesday, losing to 104th-ranked Canadian Vasek Pospisil, who marched into the last 16 with a 6-4 6-3 victory.

World number five Medvedev, long-touted as one of the most likely of the new generation of players to win a Grand Slam, saw his Rotterdam challenge ended in just 68 minutes by Pospisil.