Goffin battles past Haase in Rotterdam; Monfils and Tsitsipas sail 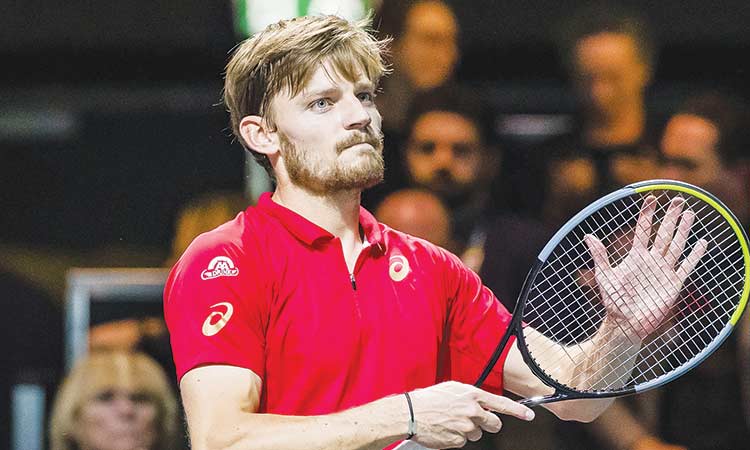 David Goffin reacts after his victory over Robin Haase in their Rotterdam Open match on Wednesday. Agence France-Presse

Goffin saved both break points he faced in the deciding set to record his seventh ATP Head2Head win in eight matches against Haase. The Belgian, who reached the Open Sud de France semi-finals last week, has now won eight of 11 matches this year.

Goffin improves to 7-6 in Rotterdam after his two-hour, 29-minute victory. The World No. 10 reached the championship match at the ATP 500 event in 2017 and also made it through to the semi-finals in 2018.

Goffin will face Jannik Sinner for a place in the quarter-finals. Sinner gained his place in the second round without hitting a ball when Radu Albot withdrew due to illness.

Defending champion Gael Monfils made a winning return cruising past Joao Sousa 6-3, 6-2 to reach the second round.

Fresh from his record-equalling third title run at the Open Sud de France in Montpellier last week, the World No. 9 claimed his ninth win in 11 matches this season after 70 minutes.

Monfils is aiming to become the first man since Robin Soderling to win back-to-back titles in Rotterdam. The Frenchman beat Daniil Medvedev and Stan Wawrinka in back-to-back three-set matches to claim the trophy last year.

Monfils will meet Gilles Simon in the second round. Making his 11th appearance in Rotterdam, Gilles Simon worked his way past Mikhail Kukushkin 7-6(3), 3-6, 6-3 over two hours and 41 minutes. As the oldest man in the ATP 500 draw, the 35-year-old hit nine aces en route to the second round.

Earlier, second seed Stefanos Tsitsipas clawed his way back from a set and a break down to beat Poland’s Hubert Hurkacz 6-7(2) 6-3, 6-1 and reach the last-16.

Tsitsipas reacted well to going 2-0 down in the second set, fighting back strongly to beat Hurkacz, who was celebrating his 23rd birthday.

The Greek big-hitter, who was knocked out in the third round of the Australian Open, has now beaten Hurkacz five times out of six, although this was another close encounter between the pair.

Tsitsipas needed a medical timeout to deal with a shoulder problem after making unforced errors in a poor tiebreak, and Hurkacz quickly stole a march in the second set before Tsitsipas launched his comeback.

The world number six broke to go 3-2 up and went on to take the set in 46 minutes, before dominating in the decisive third.

Auger-Aliassime, 19, who had his breakthrough season last year when he climbed up to 17th in the rankings, nearly threw it away in the second set against Struff when he lost five games in a row before he regained his composure in the final set.

The Canadian served seven double faults but also fired 16 aces in the contest and set up a match with Bulgaria’s Grigor Dimitrov, who eliminated Denis Shapovalov on Monday.