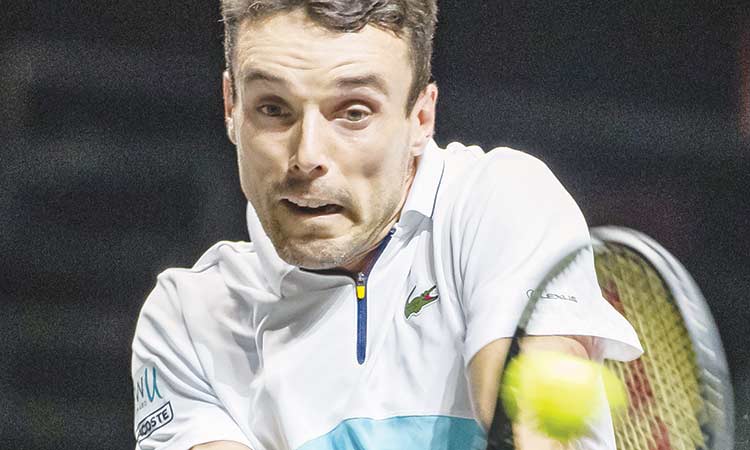 Felix Auger-Aliassime fought hard to reach the Rotterdam Open second round on Tuesday when he beat Jan-Lennard Struff 6-3, 1-6, 6-3 in just under two hours.

The Canadian hit 16 aces, but did well to bounce back from losing five straight games in the second set. He broke serve at 2-1 in the deciding set and will next challenge 2018 Rotterdam runner-up Grigor Dimitrov, who overcame eighth seed Denis Shapovalov on Monday.

“It was really tough, there was so many emotions running through my head,” World No. 21 Auger-Aliassime told ATPTour.com. “I felt I had chances in the first game of the second set, with the overheard, and so many chances to make the break. It was really frustrating.

“It led me to lose focus in the second set and get broken twice, which isn’t ideal for me or normal. In the third set, it was about forgetting and moving forward. I’m really happy, it’s a really good lesson and a great win to come back after losing the set so badly.”

Last year, the 19-year-old advanced to three ATP Tour finals and moved from No. 108 in the FedEx ATP Rankings to a career-high No. 17 on 14 October.

In his fourth appearance at the ATP 500 event, Karen Khachanov eliminated fifth seed Fabio Fognini 6-3 6-3 to record his first win in Rotterdam. The World No. 17, who opened his 2020 ATP Tour season with four wins from five matches at the inaugural ATP Cup, improves to 7-3 this year.

Khachanov landed seven aces and converted four of seven break points throughout the 79-minute contest. The 23-year-old moves into a 2-1 lead in his ATP Head2Head series against Fognini, having also beaten the Italian in three sets at last year’s China Open.

Khachanov will face Daniel Evans of Great Britain for a place in the quarter-finals. Evans advanced to the second round on Monday after a straight-sets victory against Philipp Kohlschreiber.

“There was not a lot of rhythm,” Dimitrov, who was beaten by Roger Federer in the 2018 final, told reporters. “There were not too many rallies, but I was able to stay in control.

“I was calm in the important moments and came to the net when I had to.”

Roberto Bautista Agut and Pablo Carreno Busta survived three-set marathons in their respective first round encounters to set up an all-Spanish last-16 clash.

Bautista Agut came back from a set down to beat Hungarian qualifier Marton Fucsovics 4-6 7-6(1) 6-1. Fucsovics was close to claiming the biggest win of his career in the second set before Bautista Agut forced a tiebreak.

The third set was plain sailing for the Spaniard and a double fault at 5-1 gave Bautista Agut a second match point, which he converted with a sliced backhand after an engrossing rally at the net.

Fucsovics hit 40 winners but the 41 unforced errors proved to be his downfall.

“Next round is going to be a Spanish round against Pablo,” Bautista Agut said after the win. “Hopefully one of us can take the title.”

Mannarino fired 12 aces but he was wayward with his second serve while Carreno Busta, who had 17 chances to break serve, only managed to do so on four occasions.

On match point in the third, a 20-shot rally was finished by Carreno Busta when he fired a forehand winner to advance and set up a last-16 clash with his compatriot, who has beaten him twice before in three encounters.