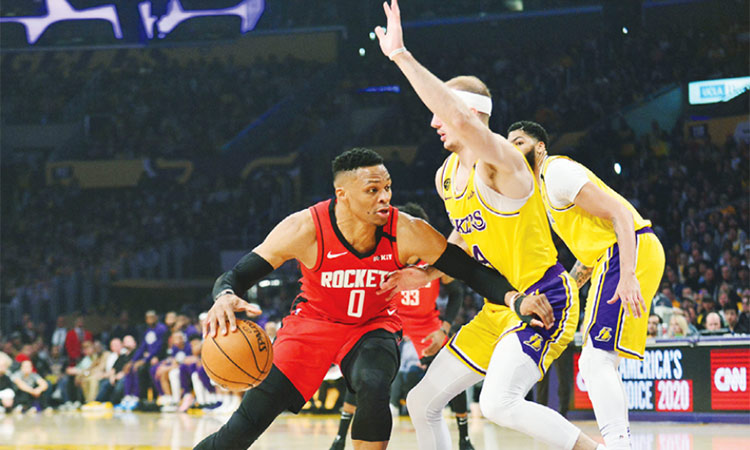 Anthony Davis shook off a sprained right index finger to lead the Lakers with 32 points.

LeBron James added 18 for Los Angeles, who trailed much of the night but took a 108-105 lead on Avery Bradley’s pull up jumper with 4:57 remaining. But the Rockets closed the game with a 16-3 scoring run to seal their fourth straight victory. Their small-ball lineup — featuring no one taller than 6-foot-6 (2m) — proved more than a match for Los Angeles.

Sharp-shooting forward Robert Covington, acquired by the Rockets from the Timberwolves this week, drained two three-pointers and produced a key block as Houstonpowered to the finish.

In Milwaukee, reigning NBA Most Valuable Player Giannis Antetokounmpo delivered a dominant 36-point, 20-rebound performance as the Bucks avenged a Christmas Day loss to the Philadelphia 76ers with a 112-101 victory. Antetokounmpo, who also handed out six assists, had 19 points and 10 rebounds before halftime as the league-leading Bucks powered to their 12th victory in 13 games.

The “Greek Freak” notched his fifth straight game of at least 30 points and 15 rebounds — the first NBA player since the 1985-86 season to put together such a streak.

Khris Middleton added 20 points, and Eric Bledsoe chipped in 14 points, eight rebounds and six assists for the Bucks, who improved to 44-7 and notched their 29th double-digit win of the season.

With a 31-21 overall record, the 76ers are just 9-19 away from home. Zion Williamson had another impressive outing in his injury-delayed debut season, connecting on nine of 11 shots from the field on the way to 21 points in the Pelicans’ 125-119 victory over the Bulls in Chicago.

The Knicks won a nail-biter in New York, where RJ Barrett returned from a nine-game injury absence to score 12 points in a 105-103 victory over the Orlando Magic.

Julius Randle, who led the Knicks with 22 points, put New York ahead for good with 4:59 remaining with a jump shot that made it 98-96.