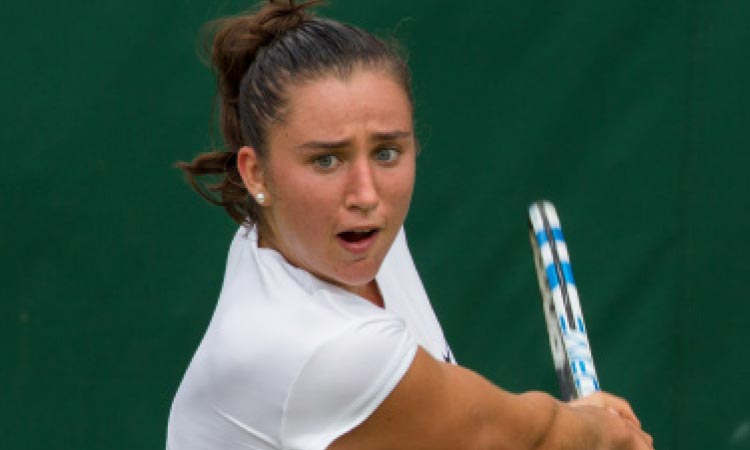 Spain’s Sara Sorribes Tormo reacts after winning a point against Japan’s Naomi Osaka during their Fed Cup match on Friday.

A tearful Naomi Osaka followed up her Australian Open disappointment with another surprise defeat on Friday when she was beaten 6-0, 6-3 by world number 78 Sara Sorribes Tormo in the Fed Cup.

Spain took an unexpected lead over Japan in the tie in Cartagena after Sorribes Tormo capitalised on a careless performance from Osaka, who made an astonishing 50 unforced errors in the 15 games.

Sorribes Tormo enjoyed the backing of a sizeable home crowd at La Manga Club and her consistency proved too much for Osaka, who has never played her best on clay.

“We knew that Sara had the game to make it very uncomfortable for Naomi,” Spain captain Anabel Medina Garrigues said. “She stuck to the game plan perfectly.”

Osaka, a two-time Grand Slam champion, has endured a shaky start to the year after being knocked out by 15-year-old American sensation Coco Gauff last month in Melbourne, where she had lifted the trophy in 2019.

Yet since claiming her second consecutive major triumph, Osaka has dipped, failing to go past the fourth round in any of the four Grand Slams since.

The 22-year-old, who has dropped to number 10 in the world, surrendered the first set to Sorribes Tormo in a swift 27 minutes before putting up more of a fight in the second.

But after leading 2-0, Sorribes Tormo came back and a break midway through proved decisive, with a clearly disappointed Osaka struggling to contain her emotions at the finish.

Osaka will now have to beat Suarez Navarro in the reverse singles on Saturday to prevent Spain booking their place in the finals in Budapest in April.

The winners of the best of five tie will be one of 12 nations in April’s new-look Fed Cup Finals.

US Open champion Bianca Andreescu was left off Canada’s singles roster at the draw ceremony on Thursday for this week’s Fed Cup qualifier against Switzerland as she continues to recover from a knee injury.

Andreescu, who missed the last three months after suffering the injury at the WTA Finals in Shenzhen, could still play doubles alongside Gabriela Dabrowski if the best-of-five tie in Biel goes the distance.

Martic enjoyed a career-best season in 2019, winning her maiden title in Istanbul and making her debut in both a Grand Slam quarterfinal at Roland Garros and in a Premier final in Zhengzhou. As a result, the Croat cracked the Top 20 for the first time - but after second-round exits in both Auckland and the Australian Open, is still seeking to kickstart her 2020 to similar heights. Former World No.5 Bouchard, endured a 13-match losing streak in 2019 and has sunk to World No.267 - but snapped out of it thanks to a third-round showing in November’s Houston 125K followed by a run to the Auckland quarterfinals last month, which included a win over former World No.4 Caroline Garcia.