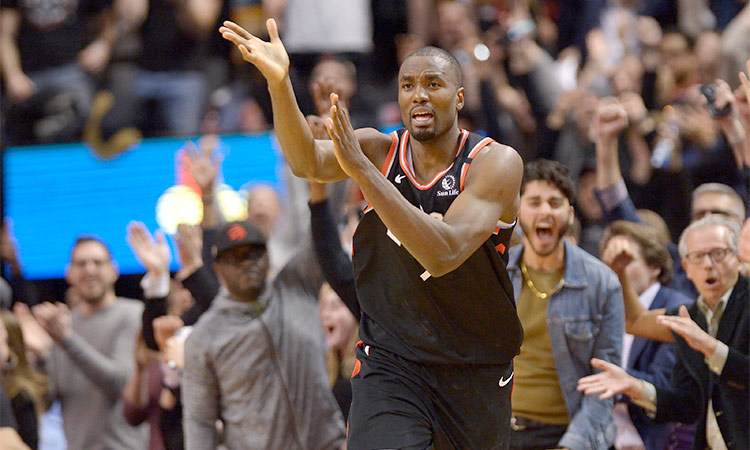 Toronto Raptors’ Ibaka celebrates after their victory over Indiana Pacers during an NBA game on Wednesday. Associated Press

The 30-year-old Congo-born big man sank a go-ahead 3-pointer with 30 seconds remaining to cap a game-ending 11-0 Raptors run as the Raptors rallied from a 19-point third-quarter deficit.

“The key is we keep our composure during the game. We just didn’t give up. We kept digging and digging,” Ibaka said.

“We have the mindset of ‘Don’t give up.’ We don’t point the fingers when things go bad. We stay together and I think that’s what makes us special.”

Toronto, which trailed 69-50 early in the third quarter, improved the third-best record in the NBA to 37-14.

Ibaka, who won his first NBA title with Toronto last year in his 10th league campaign, was bolstered by Raptors coach Nick Nurse to keep firing 3-pointers even though he was only 1-for-7 from beyond the arc until hitting the decider.

“I missed a couple open threes earlier. Coach told me keep shooting with confidence and moving the ball,” Ibaka said. “That gave me a lot of confidence.”

Nurse likes what he has seen lately from Ibaka, saying: “He is getting better. He has been really good. He’s way more than pick, pop and shoot.”

Paul George and reserve guard Landry Shamet each scored 23 points to lead eight double-figure scorers from the Los Angeles Clippers in a 128-111 home victory over Miami.

Jokic hit a go-ahead jumper with 59 seconds remaining and Murray sank two free throws with five seconds to play while Utah’s Bojan Bogdanovic missed a 3-pointer at the final buzzer.