Bavuma hits out at double standards in transformation debate - GulfToday

Bavuma hits out at double standards in transformation debate 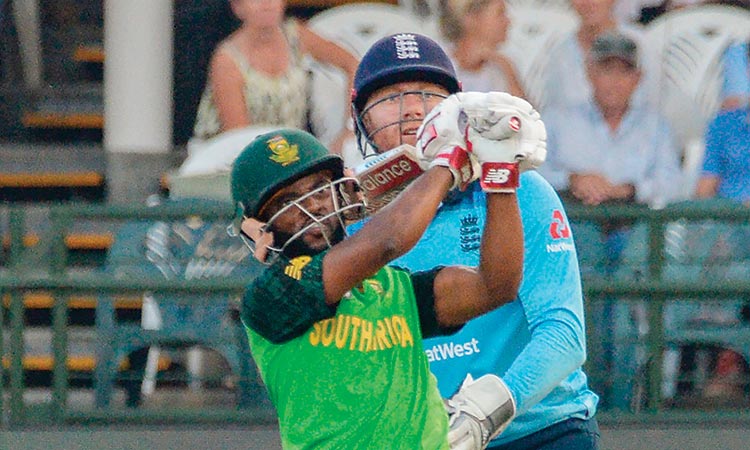 South Africa’s Temba Bavuma plays a shot as England’s wicketkeeper Jonny Bairstow looks on during their first ODI at The Newlands Cricket Stadium in Cape Town on Tuesday. Agence France-Presse

Temba Bavuma hopes his eye-catching innings in South Africa’s seven-wicket victory over England in the first one-day international at Newlands on Tuesday will end the debate over whether he deserves his place in the side.

Batting at number three, Bavuma’s excellent 98 comes after a difficult month in which he was temporarily dropped from the test side for a home series against England that South Africa lost 3-1.

His axing stirred debate on social media about whether his place in the team was deserved or whether he was only being picked because of efforts to redress imbalances from the country’s apartheid era.

Cricket South Africa targets the inclusion of two black African players and four from the mixed-race and Indian communities in each team, averaged through the year.

“It has been hard. It’s not so much the dropping part, all players get dropped, everyone goes through slumps of not scoring well,” Bavuma told reporters.

“The awkwardness and discomfort from my side is when you are thrown into talks of transformation.

“Yes, I am black, that’s my skin. But I play cricket because I love it.

“I’d like to think the reason I am in the team is because of performances I have put forward in my franchise side, and also for the national team, whenever I have been able to.”

The 29-year-old, who has been a top performer across all formats in domestic cricket over the past few years, has hit out at what he saw as double standards in the transformation debate.

“The one thing that irks me is when you are seen through the eyes of transformation,” he said.

The diminutive batsman said he is not taking his place in the team for granted.

“I don’t think I have nailed my spot in the side. This was just my third game and I am just happy to be on the field,” he added.

“I don’t know what’s going to happen after this series or next week. It’s just to enjoy the little moments I have.”

Meanwhile, England must find a way to combat South Africa captain Quinton de Kock or they will face a series loss in their first outing since lifting the World Cup last July, seamer Chris Woakes said.

De Kock appeared to play within himself as he reached his 15th ODI century and Woakes said England, who have rested their talisman Ben Stokes for this series, know the South Africa skipper often holds the key to their batting potential.

“I have bowled against him quite a bit and he is a world class player,” Woakes told reporters.

“With him being captain now as well, he has that side of the game where he wants to see them over the line and that might mean he plays even better.

“We have to find ways to get him out. I have been fortunate to play with him in the IPL, and I know we must figure out how we can stop him scoring runs. He is a big player for them.”