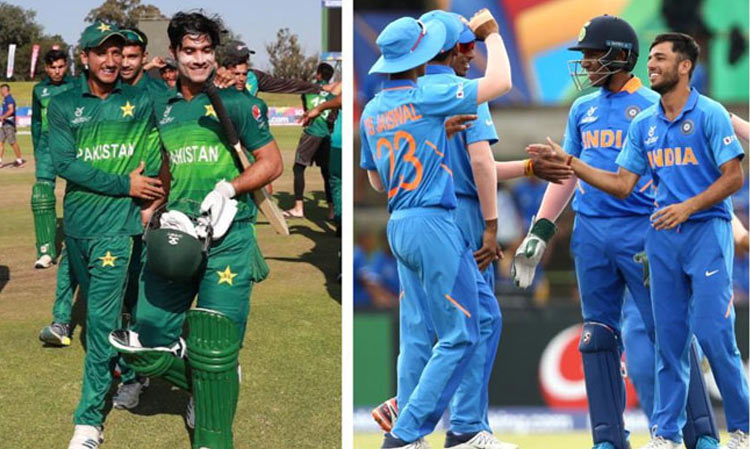 The stage in Potchefstoom is set to see who if any young Indians or Pakistanis are likely to join this elite band in the decade ahead. Twitter photo

India head into Tuesday's Under 19 World Cup semi-final against Pakistan in Pochefstroom as slight favourites but cricket matches between these two sides are seldom straightforward.

"When you talk about India-Pakistan (matches) that brings out an extra edge to the whole competition," said former India Test player Zaheer Khan in the Indian media.

"I am sure the boys will be geared up for the big occasion and they will do well."

With political relations on a knife-edge, there has been no Test series between the two countries since 2007/2008 and no white ball series since 2012/2013.

The only time they have come together of late is at international tournaments.

In 2019, they met at Old Trafford during the ODI World Cup in England — Rohit Sharma's 140 ensuring a comfortable India win.

And now it is the turn of the youngsters, the future stars of international cricket, to go up against each other in South Africa's North West province, close to the Mooi river.

The Indians won their group beating New Zealand and Japan in the process before going on to hammer Australia by 74 runs in the quarter-final.

Pakistan's group match against Bangladesh — who meet New Zealand in the second semi-final on Thursday — was abandoned with Bangladesh in desperate trouble at 106 for nine. The Pakistanis beat Scotland and Zimbabwe to set up a quater-final with Afghanistan.

That was another comfortable win in spite of the twitter storm over Afghan spinner Noor Ahmed running out Muhammad Huraira when he marginally backed up too far at the bowler's end.

The Indian quartet Yashasvi Jaiswal, Ravi Bishnoi, Akash Singh and Kartik Tyagi have already found their way into the IPL, each of them making important contributions in South Africa.

"In this World Cup, I bowled very well in the first game but got no wickets," fast bowler Tyagi, whose four for 24 did for Australia in the last round, told Cricinfo.

"Then the next two games, I bowled poorly but I took wickets. And finally, against Australia, I bowled well and got rewarded for them.

"Ups and downs are the realities of life, so I've stopped thinking about the wickets column. I have just been focusing on the process."

For all the players at this World Cup, there remains the dream not just of winning but doing enough to start forging a professional career in the game.

Some big names have trodden this path before: current international captains Virat Kohli, Eoin Morgan and Kane Williamson all figured at the tournament in the past along with some of the greats of the recent past, players such as Brian Lara, Yuvraj Singh, Chris Gayle and Steven Smith.

The stage in Potchefstoom is set to see who if any young Indians or Pakistanis are likely to join this elite band in the decade ahead.