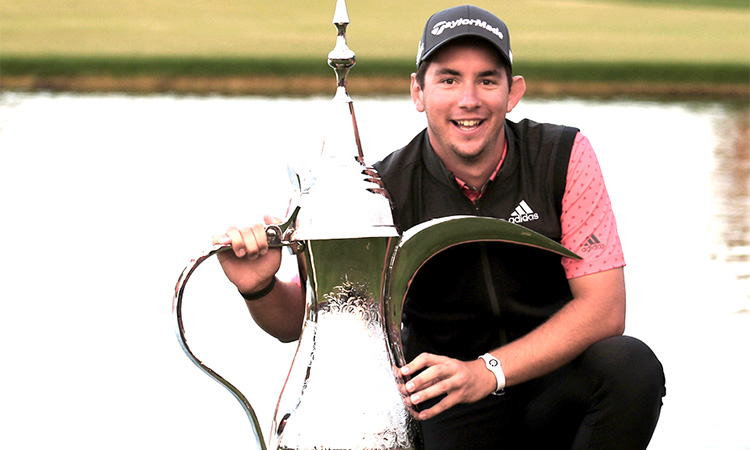 Herbert held his nerves to merge winner after both the players were tied in the final round and the game went into the play-offs.

Herbert staged the biggest final-round rally in the 31-year history of the tournament. Herbert had started the day five shots adrift to overnight leader Wu Ashun of China. The previous record was held by Tiger Woods, who overcame a four-shot deficit in 2008.

It was the 24-year-old Herbert’s 50th appearance on the European Tour and the win is expected to lift him from 223rd in the world ranking to number 77 tomorrow.

After hitting his second shot in the first extra hole into the water on the par-5 18th hole, Herbert made a terrific up-and-down for par, and then birdied the same hole a little while later. Bezuidenhout overshot the green with his second and failed to make his up-and-down from there.

Both Bezuidenhout and Herbert shot rounds of four-under par 68 in extremely difficult conditions to set the clubhouse marker at nine-under par 279 at the Majlis course of Emirates Golf Club.

However, none of the leading players after the third round could catch up with the two as gusting winds of 30 miles per hour and more wreaked havoc on the field.

Earlier, Sebastian Soderberg made golfing history on Sunday, the Swede completing his final round at the Dubai Desert Classic in a European record time of one hour and 36 minutes.

The 29-year-old was playing alone and first off after 71 players made the cut.

With his brother Jesper on the bag, the duo hatched a plot to polish off the round as quickly as possible, their plan included sprinting after hitting each shot and between the holes.

Soderberg said he needed a buy-in from his brother and caddy to execute the plan.

“I thought about it last night, but the important thing was that my brother on the bag, he had the big job, because he ran non-stop pretty much,” Soderberg revealed.

“He said this morning that he was excited about it, so we said ‘let’s do this’.” The previous fastest round on the European Tour was one hour and 59 minutes by Belgium’s Thomas Pieters at the Italian Open last year.

On the PGA Tour, American Wesley Bryan needed just 89 minutes to finish his final round at the 2017 BMW Championship.

Soderberg, the winner of last year’s European Masters, added: “We decided that whenever it was a par-3, he would go and wait on the greens. On the par-4s and 5s, he would just leave me the appropriate clubs and go to the fairways.” Soderberg hit his first tee shot at 0710 local time (0310 GMT) and sunk his last putt for par on the 18th at 0846.

He made a birdie on the fifth hole and four bogeys in a round of three-over par 75.

After finishing the tournament at 10-under par total, Soderberg said: “I always wanted to jog and play as fast as I could.

“I struggled the last two days, so I figured it wouldn’t really hurt my game just to jog in between, and not think too much. I think three-over was quite a good result, with zero fairways hit.”

Sweating profusely after his pivotal part in the record-breaking bid Jesper said: “It was fun, but I am never going to do that again. I actually have no idea of what he shot. I did not count anything.”

With conditions difficult once again at the Majlis course and a strong breeze blowing, Soderberg’s 75 actually improved his position by one mid-way through the round.