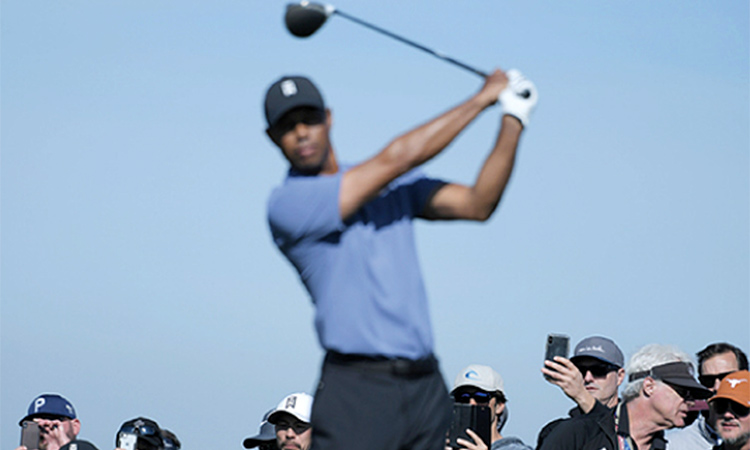 Tiger Woods plays his shot from the 18th tee during the first round of the Farmers Insurance Open at Torrey Pines North in San Diego, California, on Thursday. Agence France-Presse

Tiger Woods, seeking an unprecedented 83rd career US PGA Tour victory, fired a three-under par 69 that left him three off the first-round lead shared by Sebastian Cappelen and Keegan Bradley at Torrey Pines.

At the famed tract north of San Diego, where the 44-year-old American has previously captured eight titles, Woods closed with a five-foot birdie putt on the ninth hole of Torrey Pines’ North Course, with golfers also competing on the harder-playing South Course.

“Overall, I’m pleased to shoot in the 60s. The course was gettable today,” Woods said. “I felt like I hit the ball well.

“I’m very pleased to get something in the red and get over to south tomorrow.” Sixth-ranked Woods matched US legend Sam Snead for the all-time US PGA title record on 82 by winning last October’s Zozo Championship in Japan and this is his first opportunity to claim sole possession of the mark.

Woods, who won his 15th major title at the Masters last April, broke 70 in an opening round at Torrey Pines for the first time since 2013, when he captured his most recent Farmers Insurance Open victory on his way to five titles that year.

“I definitely was feeling it,” Woods said of the adrenaline competition brings. “I missed the competition.

“I tried to keep everything as calm as I possibly could. I didn’t do well at the start with a bogey. I fought back. I take a lot of positives to the South Course.”

Danish rookie Cappelen made eight birdies and two bogeys on the South Course to seize his share of the lead.

He was joined on six-under by 2011 US PGA Championship winner Keegan Bradley, who had an eagle and four birdies on the North Course.

Spain’s Jon Rahm and Australians Marc Leishman and Cameron Percy were in another big group on 68. Rahm played alongside Woods and 22-year-old American Collin Morikawa -- who wasn’t born when Woods made his pro debut.

McIlroy was back in action after a six-week break.

“I drove the ball well for the most part,” he said. “A little rusty around the greens but with a little more practice I’ll feel a little more composed as the week goes on.

Woods reached 2-under on his second nine by sinking a six-foot birdie putt at the first hole and tapping in for birdie at the par-5 fifth after missing left on a 20-foot eagle putt.

At the par-3 eighth, Woods found a greenside bunker but blasted out and sank his par putt, setting the stage for his closing birdie.

Meanwhile, Jessica Korda waited out a late rain delay to cap her six-under-par 66 with her eighth birdie of the day, seizing a two-shot lead over a chasing trio in the Gainbridge LPGA at Boca Rio in Florida on Thursday.

Korda had taken a one-shot lead at five-under with a birdie at her penultimate hole, the eighth, and was playing the ninth when rain halted play.

After a 40-minute delay the American returned and drained a 25-foot birdie putt that put her two up on South Korean Kim Sei-young, Thailand’s Patty Tavatanakit and Japan’s Yui Kawamoto.