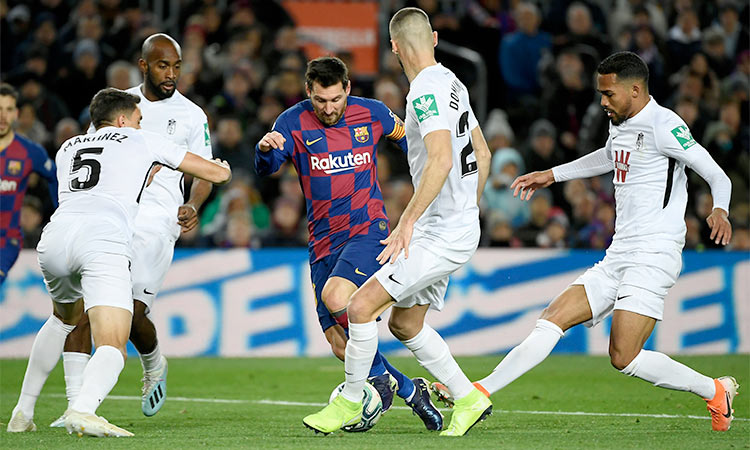 Barcelona’s Lionel Messi vies for the ball with Granada’s players during their Spanish League match on Sunday. Agence France-Presse

Messi struck in the 76th minute to decide a cagey contest at the Camp Nou and prevented the much-anticipated launch of Setien’s new era becoming something of a damp squib.

With the victory Barca also went back to the top of Spanish League on goal difference, after rivals Real Madrid had briefly claimed first place following their win over 24 hours ago.

“I have seen many things from the team today that I want to see,” said Setien.

“But I already saw some of them against Atletico (last weekend) because Barca has been doing great things for many years.”

The result could have been different had Granada not spurned the chances when they had an opportunity to restore the parity.

If Granada’s Yan Eteki hadn’t struck the post with just over 20 minutes left or their central defender German Sanchez not been sent off for a needless second yellow card soon after the game might have ended in a draw.

The extra man was the boost Barca needed and Messi duly poked home his 17th goal in 21 games this season following good work by Arturo Vidal, Antoine Griezmann and the 20-year-old Riqui Puig.

Setien said last week that if he could make one guarantee, it was that Barcelona would play good football while he is in charge and although few could argue this was a transformative display following the sacking of Ernesto Valverde, there were certainly some encouraging signs.

The passing was faster, the pressing higher and Messi spent most of the match playing down the middle, with Griezmann on the left and Ansu Fati, another youngster, on the right.

Setien claimed on Saturday he would never go home happy after winning and playing badly but a 1-0 victory gets his tenure off to a positive start and, with Real Madrid showing no sign of stuttering, he could hardly afford anything less.

His team had 83 per cent possession in the first half but chances were not as clear-cut and, as it was under Valverde, nearly everything went through Messi. His driving run teed up Fati, who shot over, and then a cutting reverse pass set Alba away but Fati failed to finish at the back post.

Messi won the ball back on the ground and then nipped past two players. He flashed wide at the end of a fluid team move and missed from two free-kicks.

Vidal has always harried and when he won the ball back early in the second half, Barca had a four against two. But Messi’s pass was heavy and the angle for Vidal became too acute.

The game drifted and tension grew but two moments proved crucial. First Eteki’s shot was kept out only by the post as he drove hard past the right hand of Ter Stegen.

Then, less than five minutes later, Granada were reduced to 10 men after German picked up a second yellow card for a late hack on Messi. It left Granada needing to survive 21 minutes and they only made it through eight.

Puig, on for Ivan Rakitic, recovered possession in the corner before Messi picked up the ball centrally. In a flash, he played in Griezmann, who found Vidal, whose swivelled a flick back into the path of Messi and he poked a finish into the corner.

Setien threw both arms into the air and looked to the sky, with joy and also relief.

Earlier, two challengers for the top four stumbled as Valencia were thrashed 4-1 away at Real Mallorca and Real Sociedad beaten 3-0 by Real Betis.

After Sevilla and Atletico Madrid both lost on Saturday, Real Madrid and Barcelona are now eight points clear of the chasing pack, in what looks increasingly like a two-horse race.