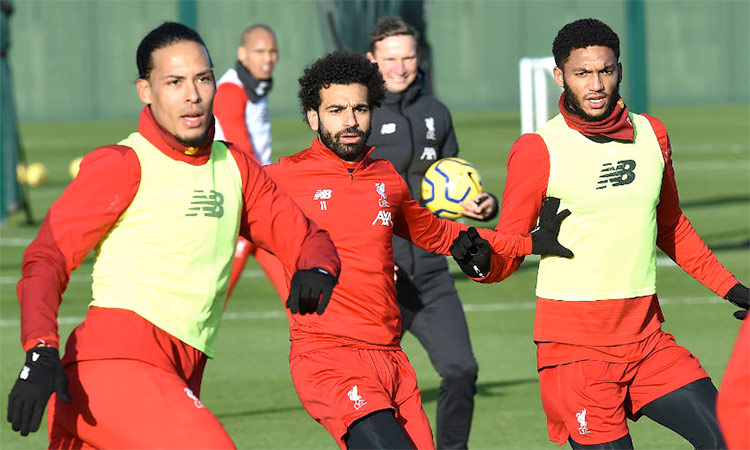 Liverpool players during training, ahead of their EPL match on Sunday against Manchester United — the only side to have slowed the Reds’ relentless march towards the Premier League title.

Jurgen Klopp’s men look destined to end a 30-year wait to win a top-flight title, with a 14-point lead over defending champions Manchester City plus a game in hand.

United are a further 13 points back, having also played a game more than their rivals, and in need of a strong end to the campaign to avoid failing to qualify for the Champions League for a second consecutive season.

Ole Gunnar Solskjaer’s men are, however, the only side to have slowed Liverpool’s relentless march towards the Premier League title.

The 1-1 draw between the teams in October was the only time the European champions have dropped points this season. They have now set a record for Europe’s top five leagues, with 20 wins from their opening 21 games.

“Our team have a winning mindset. We always think about the next game, we don’t look too far ahead,” said Liverpool goalkeeper Alisson Becker, who has conceded just one goal in his past 10 games.

“We focus upon what is within reach at the time and we do everything possible to make sure we leave the pitch with a win and this has contributed to the great results this season.”

The Brazilian number one will be confident of another clean sheet on Sunday, with United’s top scorer Marcus Rashford a serious doubt after lasting just 15 minutes as a second-half substitute in Wednesday’s 1-0 win over Wolves in the FA Cup.

Meanwhile, Pep Guardiola’s Manchester City will not retain their Premier League title barring a spectacular Liverpool implosion, but the form book suggests the Catalan could still end up celebrating a trophy-laden season.

The defending league champions have won nine of their past 10 games in all competitions, their only defeat since early December coming when they were reduced to 10 men and lost 3-2 at Wolves.

The visit of Crystal Palace on Saturday is followed by a trip to face Sheffield United before they take on Fulham at home in the fourth round of the FA Cup and Manchester United in the second leg of their League Cup semi-final.

City hold a 3-1 lead in that tie in a competition in which they have not lost a game since October 2016, an extraordinary run that makes Guardiola’s side overwhelming favourites to win the League Cup for a third consecutive season.

Guardiola, whose side won a domestic treble last season, will be relishing the return of influential centre-half Aymeric Laporte following a knee injury he suffered at the end of August.

The French international’s absence has been a major factor in City’s difficulties this season, although he has been making impressive strides in first-team training.

An original prediction of a February return has been brought forward slightly, with Laporte now tipped to be back before the end of the month, possibly in the League Cup derby meeting with United on Jan.29.

The 25-year-old’s return would allow Brazilian Fernandinho to return to his holding midfield role, bolstering City in two areas of the pitch.

Even more good news is on the horizon, with German international winger Leroy Sane making a rapid recovery from a knee ligament injury that has sidelined him since the first week in August.

The 24-year-old is in solo training but is expected to join first-team sessions imminently and a return to competitive action next month is now a realistic target.

“I think he is close,” said Guardiola last week. “I spoke with him two days ago and he said to me he is training alone with the ball, he is doing incredibly well.

The return of Laporte and Sane could be crucial as City prepare for the return of the Champions League, which they have never won.

City face a two-legged last-16 tie against Real Madrid, with the first leg taking place in Spain on February 26.

Guardiola, who was twice a European champion while in charge of Barcelona, has constantly tried to downplay the importance of winning the trophy, although the club’s owners have made no secret of their desire to win the continent’s biggest club prize.

With a top-four finish in the Premier League all but guaranteed, Guardiola can afford to rotate his squad in Premier League games and focus on the three cup competitions still within his reach.