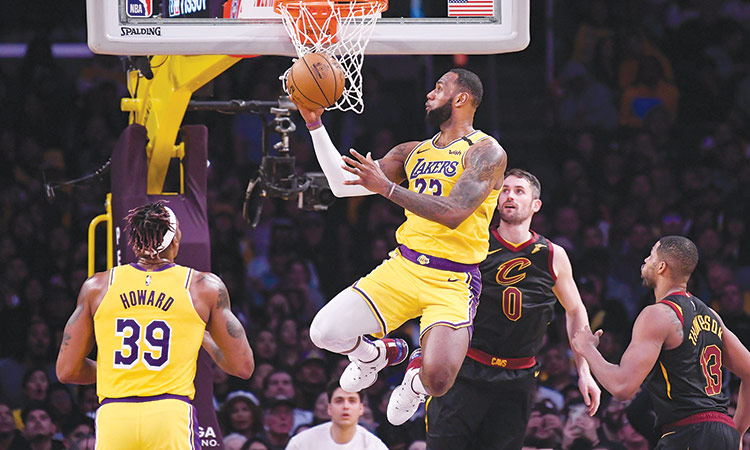 LeBron James scored 23 of his 31 points in the second half as the Los Angeles Lakers broke open a close game to register a ninth straight NBA victory, 128-99 over the Cleveland Cavaliers.

With Lakers star Anthony Davis still sidelined by a sore backside from a fall, Dwight Howard added season highs of 21 points and 15 rebounds for the Western Conference leaders.

“Any time I’m linked with the greats it’s just an honor,” James said of passing Thomas.

James, who missed the Lakers’ last game because of illness, improved to 2-0 against the Cavaliers since he departed Cleveland for Los Angeles in 2018.

The Cavs had leapt to a 14-point lead in the first half but the Lakers had cut the deficit to one point at the interval and exploded with 81 points in the second half.

“Defensively we got stops and we had great pace. Even when they scored we got the ball out and continued to play with a lot of pace,” James said. “That allows us to get into our offense. We’re playing with a lot of balance.”

Shai Gilgeous-Alexander wrote himself into the record books in Minnesota, helping propel the Oklahoma City Thunder to a 117-104 over the Timberwolves with his first career triple-double.

His rebound total was a career high -- and the most in the league by a guard in a game this season.

He joined former Thunder superstar Russell Westbrook as the only guards with 20-point, 20-rebound triple-doubles in the last 30 seasons.

At 21 years and 185 days old he became the youngest player in league history with a 20-rebound triple-double -- breaking a mark set by Shaquille O’Neal in 1993.

“Coach just challenged me before the game to fill the stat sheet,” the second-year player from Canada said. “He knows what I’m capable of. I just wanted to step up to the challenge personally.”

The Philadelphia 76ers’ road woes continued in Indiana, where T.J. Warren scored 21 points and produced a big block with 29 seconds left to help the Pacers to a 101-95 victory.

In a battle of teams jockeying for playoff position in the Eastern Conference, Indiana notched their second win in 14 days over the 76ers, handing Philadelphia their sixth straight defeat on the road.

The Sixers have lost two of three since Joel Embiid was sidelined by a left hand injury and fell to 25-16 -- just a hair behind the 25-15 Pacers for fifth place in the East.