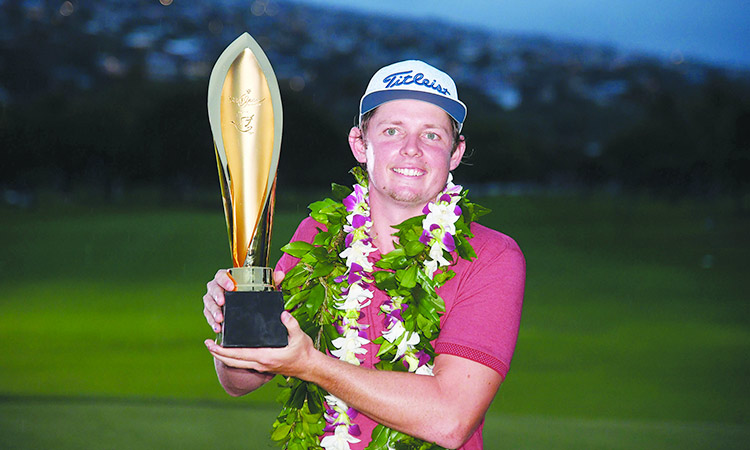 Cameron Smith poses with the trophy after winning the final round of the Sony Open in Hawaii on Sunday. Agence France-Presse

Australia’s Cameron Smith, whose uncle lost his home in the brushfires devastating their homeland, parred the first playoff hole to beat Brendan Steele on Sunday and win the US PGA Sony Open in Hawaii.

In rainy and breezy conditions at Honolulu’s Waialae Country Club, Smith sank an eight-foot birdie putt at the par-5 18th to force a playoff then two-putted from 10 feet to defeat a US rival who had led all day.

“You just have to hang in there,” Smith said. “No one was playing good Golf today it seemed like. I just hung in there and what do you know.”

It was the first solo US PGA victory for Smith, who shared the 2017 Zurich Classic pairs event title with Swede Jonas Blixt.

“That has been one I’ve wanted to tick off for a long time,” Smith said. “I’ve been out here four or five years now. To say I’ve won an event by myself now is quite good.” Smith is among the Aussie Golfers at the event donating a portion of their prize money to the relief effort for the blazes Down Under.

“Me winning here, I hope that brings a little bit of joy to some people who are going through some tough times,” said Smith, who moved his uncle into his US home after his farm was destroyed by fire.

For Steele, who led alone from the first tee until the penultimate putt of the day, it was a gut-wrenching defeat.

With his ball plugged in a bunker at the par-3 11th hole, Steele chipped in with a sand wedge from 30 feet for a birdie to reach 13-under and seize a three-stroke advantage.

But last-group playing partner Smith sank a five-foot birdie putt at the 12th and Steele took a bogey at 13, missing a five-foot par putt, to leave him only one stroke ahead.

Smith, however, found a bunker at the par-4 15th and missed a six-foot par putt for a bogey to stumble two back with three to play.

Steele then opened the door with a bogey at the par-3 17th, missing the green off the tee and then a six-foot par putt, to leave him clinging to a one-stroke lead over Smith and Americans Ryan Palmer and Webb Simpson.

Palmer struck the top of a scoreboard on his approach at 18 and lost his ball on the way to a bogey and Simpson missed a 15-foot birdie putt, leaving Steele and Smith to settle matters in the final group.

After a 15-minute wait before teeing off at 18 so excess water could be removed from the green, Steele drove the ball into the middle of the fairway.