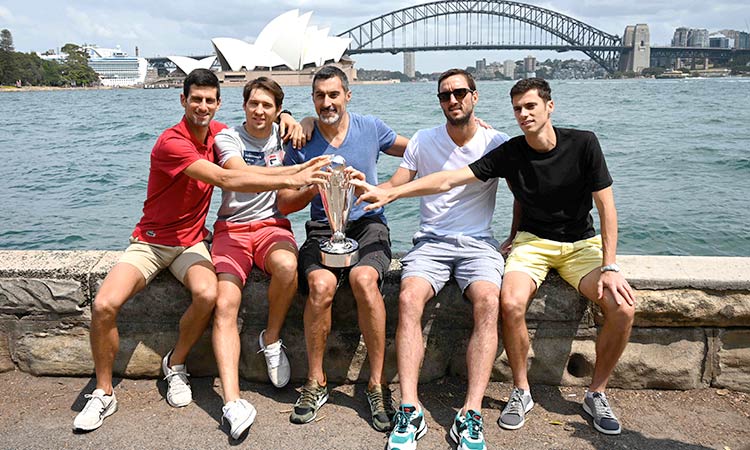 Serbia coach Nenad Zimonjic (centre) and team players pose with the ATP Cup during a photo shoot in Sydney on Monday. Agence France-Presse

Novak Djokovic says next week’s Australian Open is wide open and while bookmakers see the seven-times champion as the hot favourite the Serb expects the current crop of young talent to push for glory at the season’s opening Grand Slam.

Djokovic recorded a ninth consecutive hard-court win over world number one Rafa Nadal on Sunday as Serbia were crowned champions at the inaugural ATP Cup team event in Sydney.

Djokovic also downed 2019 US Open runner-up Daniil Medvedev, former Wimbledon finalist Kevin Anderson and rising stars Denis Shapovalov and Christian Garin at the tournament, showing no signs of the elbow issues that resurfaced at the end of last season.

Despite his ominous form, defending champion Djokovic expects a stiff challenge from long-time rivals as well as the new generation.

“I think it’s really open, the Australian Open or any other slam,” he told reporters.

“I don’t think there are really clear favourites. You have obviously (Roger) Federer, Nadal, myself because of the experience and everything and the rankings that we get to be probably named the top three favourites.

“But then you have Medvedev, (Stefanos) Tsitsipas, Dominic Thiem that are really showing some amazing tennis.”

The ‘Big Three’ of Djokovic, Nadal and Federer have shared the last 12 Grand Slam titles but the Serb said Tsitsipas’s triumph at the ATP Finals in November showed the young guns are ready to battle for major honours.

“They showed that they matured on the big stage, that they can challenge the best players in the world and win against them,” Djokovic added.

“So everybody keeps on talking about NextGen player winning a Slam. It seems like it’s getting closer. Hopefully not this year. We’ll see.”

Meanwhile, Federer declared himself ready on Monday to kick off the new season at next week’s Australian Open despite having played no competitive matches since November. The 20-times Grand Slam winner was scheduled to warm-up for the year’s first major at the inaugural ATP Cup in Australia but withdrew to spend more time with his family.

In contrast, his rivals Djokovic and Nadal were part of some closely-fought matches at the team event, which was played in Brisbane, Perth and Sydney.

Federer, 38, said he was happy with his preparation at home.

“I’ve trained long and hard in the off-season and I didn’t have any setbacks, which is crucial,” Federer said at a promotional event in Melbourne.

“Last week I was asking myself ‘am I happy to go to Australia, or I should rather just stay here and stopping pack immediately? Because I can.

“I could easily just stay home and I was like, ‘no, no, I’m really happy to go to Melbourne and kick off the season there’.

“I have kept myself in good shape, obviously I had an amazing team around me.”

A six-time winner at Melbourne Park, Federer won the Australian Open title in 2017 and 2018 but lost to Greek Stefanos Tsitsipas in the fourth round last year. Nadal has also shown no sign of trouble with his game or his fitness and the contenders at the Australian Open could again be the Big Three, who have shared the last 12 Grand Slam titles.

“I’m aware that at 38 I shouldn’t be the favourite, it should be someone probably in their 20s, but the three of us have been able to stay as the favourites which is great for us,” Federer said.

“Both guys are already showing great signs. I was watching a little bit of their ATP Cup match and thought that was a great match. Both guys, injury free, are always tough to beat.”