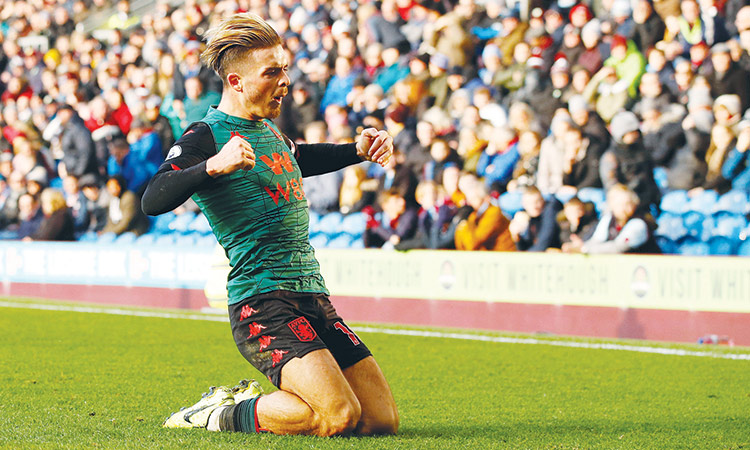 Aston Villa’s Jack Grealish celebrates after scoring against Burnley during their EPL match at the Turf Moor in Burnley on Wednesday. Reuters

Tottenham and Chelsea slipped up in the Premier League’s top-four race on Wednesday but Leicester tightened their grip on second spot during a busy programme of New Year’s Day football.

Chelsea remain in pole position to secure the fourth Champions League qualification place but Frank Lampard will rue conceding a spectacular late equaliser in the 1-1 draw against Brighton.

Those dropped points gave Jose Mourinho’s Spurs the chance to crank up the pressure on Chelsea and Manchester United but they slipped to a 1-0 defeat at Southampton, while high-flying Wolves went down 2-1 at rejuvenated Watford.

Cesar Azpilicueta gave Chelsea the lead in the early kick-off on England’s south coast, tapping in from close range in the 10th minute to put the gloss on their early dominance.

The visitors missed chances to increase their lead but were indebted to goalkeeper Kepa Arrizabalaga for producing a series of sharp saves at the other end.

Brighton scored the goal their persistence deserved in the 84th minute when Iranian substitute Alireza Jahanbakhsh acrobatically found the bottom-left corner with an overhead kick to give his team share of the points.

Chelsea had won all nine of their previous league meetings with Brighton.

“It was frustrating for different reasons,” Lampard told BT Sport. “In the first half, the game was there to be won. We weren’t ruthless enough. We got the goal and we had the possession. But we just didn’t kill the game off. We allowed them to stay in the game. In the end it was a wonder goal but we were lucky not to lose the game.”

The Chelsea boss said he was concerned about the lack of consistency from his side, who have beaten Tottenham and Arsenal in recent weeks but also lost at home to Southampton.

Tottenham travelled to Southampton with the chance to overtake Manchester United and move three points behind Chelsea but they fell behind to a 17th-minute Danny Ings goal.

Mourinho was given an extra headache with 15 minutes to go, when Harry Kane limped off, clutching his left hamstring.

Leicester appear to have put a mini-slump behind them, beating Newcastle 3-0 courtesy of goals from Ayoze Perez, James Maddison and Hamza Choudhury after their win at West Ham on Saturday.

Brendan Rodgers shuffled his pack once again as he made six changes for trip to the northeast.

Earlier, Villa beat Burnley 2-1 despite seeing a Jack Grealish goal controversially chalked off by VAR -- a result that lifted them out of the relegation zone.

Wesley put Villa ahead in the 27th minute and captain Grealish doubled his side’s advantage four minutes before the break as his powerful effort found the top corner.

Chris Wood pulled a goal back for Burnley with 10 minutes to go but Villa held on to secure all three points.

“It was massive. We’ve only had one away win all season before this,” Grealish told the BBC. “To come here, one of the hardest places in the league, it was well-deserved and well-needed.”