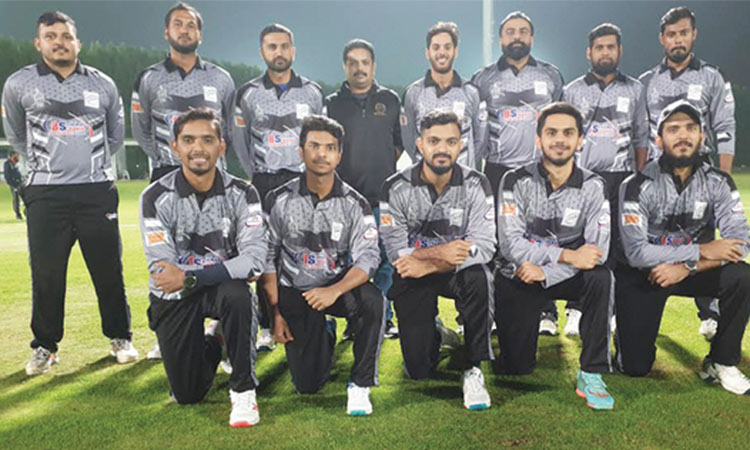 Bukhatir XI players pose for a picture after winning their BS Champions Trophy match against ANIB XI on Top.

ANIB XI won the toss and elected to bat first. The idea of taking to the crease first proved fatal as ANIB XI lost their opener Manu Danube with just 15 runs on the board. Danube (5) was removed by Kashif.

Kashid struck again and send Rameez Abdul Kareem back to the pavilion while Gopakumar Gopalakrishnan and Ahsan Shahzad cleaned bowled the next two batsmen, which left ANIB XI struggling at 44-4.

In reply, Bukhatir XI were off to a perfect as their captain and UAE national team player Chirag Suri shared an 37-run stand with Renjith Mani for the opening wicket.

Mani scored 46 with the help of four boundaries and equal number of sixes.

Later, Rizwan CP and Kashif played and unbeaten knocks of 39 and 43 respectively as Bukhatir XI reached the target in 17.3 overs.

Kahif, who earlier took two wickets, was named as man of the match.