Kohli and Cummins finish 2019 at top of ICC Test Rankings 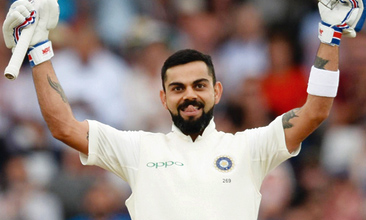 With 928 points, Virat Kohli was comfortably ahead of Steve Smith (911) and Kane Williamson (822) in the ICC Rankings list for Test batsmen.

India skipper Virat Kohli finished 2019 as the top ranked Test batsman in the ICC Rankings. With 928 points, he was comfortably ahead of Steve Smith (911) and Kane Williamson (822) in the list. Kohli was at the top for 274 days throughout the year.

Cheteshwar Pujara and Ajinkya Rahane were the two other Indians in the top 10 finding themselves at 5th and 7th spots, respectively.

Australia fast bowler Pat Cummins finished at the top of the bowlers’ list with a five-wicket haul in the first innings in Melbourne. He occupied the top place for 321 days during the year, while South Africa fast bowler Kagiso Rabada was No. 1 for 44 days after starting 2019 in top position.

India have three bowlers in the Top 10 with Jasprit Bumrah retaining his sixth spot and the duo of Ravichandran Ashwin and Mohammed Shami claiming the ninth and tenth positions, respectively.

Jason Holder finished as the top all-rounder, occupying number one position for 342 days. Shakib-al-Hasan was at the top for 23 days.

In the ICC World Test Championship, Australia have strengthened their position in second place in the points table after gaining 40 points for the Test win. They are on 256 points and could go up to 296 by the end of the series. South Africa have 30 points after their first win in the WTC while New Zealand and England remain on 60 and 56 points, respectively. India continue to be at the top spot with 360 points.

Meanwhile, Kohli and Jasprit Bumrah are the only two Indians who have been able to make a cut to the T20I team of the decade announced by Wisden.

Surprisingly, the team led by Australia’s Aaron Finch, doesn’t have either MS Dhoni or Rohit Sharma.

“While Kohli’s record in domestic T20 cricket is patchy, the same cannot be said of T20Is. Kohli’s average of 53 was the best in the decade, and while his consistency compromises his strike-rate slightly, he is still able to score at a good rate, even if not exceptional,” said Wisden about Kohli.

“Strong against pace and spin, and rapid between the wickets, Kohli is an ideal player at No.3, able to fight fires when an early wicket is lost and stabilise the innings, but also accelerate when a platform is set. Following a huge first-wicket partnership, Kohli will slide down the order in this XI,” it added.

Kohli has found place in Wisden’s Test and ODI team of the decade as well. The Indian skipper has also been included in the list of five cricketers of the decade announced by Wisden along with Steve Smith, Dale Steyn, AB de Villiers and Ellyse Perry.

Talking about Bumrah, Wisden said that despite only making his debut in 2016, the Indian pace spearhead finds a spot in this team thanks to his defensive brilliance.

“Bumrah’s overall economy rate of 6.71 is the second best in the world among quick bowlers, behind Dale Steyn. This statistic is more impressive when you consider he did the majority of his bowling in the death overs, where his economy rate of 7.27 was the seventh best in the world, and comfortably the best by a quick bowler. Bumrah is likely bowl three overs at the death for this side.”