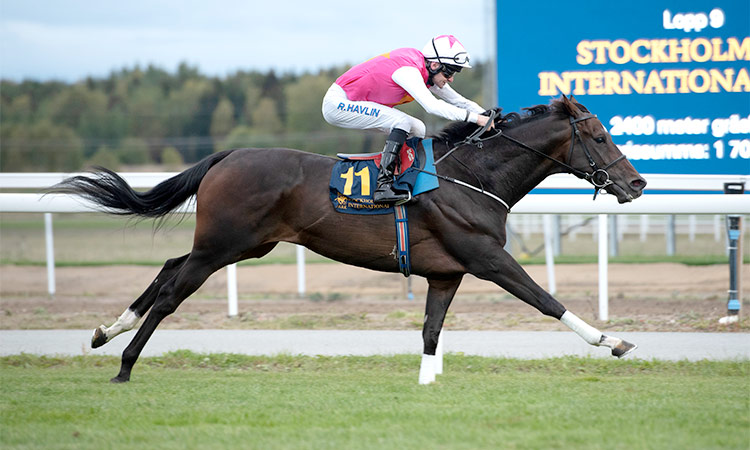 The most dominant 3-year-old of the 2019 Dubai World Cup Carnival, Godolphin’s Divine Image, has returned to trainer Charlie Appleby’s UAE base of operations and is settling nicely, per her conditioner.

“She’s doing well,” Appleby confirmed. “I haven’t set a target for her. We have the Balanchine and Cape Verdi as possible targets. I brought over another filly as a possible for those, as well, but those would be the two possible targets.”

Raced just six times, the chestnut daughter of Scat Daddy broke her maiden at first asking at Chelmsford over an all-weather mile a year ago. Six weeks later, she was second in the $250,000 UAE 1000 Guineas (Listed) as the favourite, but impressively rebounded in the $250,000 UAE Oaks (G3) next out, gobbling up ground to win by a neck.

Just two weeks later, she manhandled the boys in the $350,000 Al Bastakiya (Listed) on Super Saturday by 7½ lengths, but, unfortunately for her faithful, she flopped as the favourite in the $2.5 million UAE Derby (G2), finishing seventh after suffering from nerves and traffic issues. She returned from a five-month break to similar results in the Prix de la Nonette (G2) at Deauville.

“She’s quirky, as we saw at Deauville and have seen in Dubai with her temperament,” Appleby continued. “She’s showing all the right signs. She’s settling back into track work and seems happy doing track work (in Dubai) more than she enjoys the European style of training (in England). Hopefully that will point us in the right direction again.”

Meanwhile, he  has  been  called  one  of  the  most talented   horses   ever   to   race   in Scandinavia,  which  is  good  news  for UAE  racing  fans,  as Niels  Petersen-trained  luminary Square  de  Luyneshas descended upon Dubai, leading a quintet of Dubai World Cup Carnival invaders for the Norwegian conditioner.

A stunning winner of the Stockholm Cup  (G3) in  September, the  Stall  Power  Girls-owned  son  of Mandurohas cleared quarantine and is reportedly settling in nicely.

“He shipped down well and has just been jogging,” Petersen said.

“This is the first time he has flown and is a very inexperienced horsewith only eight or nine runs. He’s alate-maturing horse and that means histemperament has him a little on his  toes. He will need time to settle in, butI must say I am happy with how he’s settlingso far. (Dubai Racing Club is) doing everything for us to make it right for us. So far I’m pleased.”

Unraced since said 2400m race, the 4-year-old bay gelding has been a terror to his northern counterparts, destroying  foes  in  the 2018 Norsk  Derby  (Listed),  Oslo  Cup  (G3)  and  Marit  Sveaas  Minnelop  (G3)  in Norway before sacking Sweden in the aforementioned romp. “I wanted to give him a little break after the Stockholm Cup,” Petersen said.

“He had three runs and that was enough. Ispoke to (jockey) Pat Cosgrave after he rode him in the (Marit Sveaas Minnelop) and asked if he was good enough to come to Dubai and hethought he was, so we gave him rest to prepare. We will look at Super Saturday with him and maybe a run before during the Carnival. I’m not sure yet.” Petersen  also  returns  with  2018  Al  Bastakiya  (Listed)  runner-up Nordic  Defense, promising  2-year-old fillies Ascot  Brassand Careless  Whisper,  as  well  as dominant 2019  Norsk  Derby  (Listed)  winner Privilegiado. “Nordic Defense likes the dirt,” Petersen explained.

“He got sick in the spring and he ran poorly and I said to the ownerto just leave him and I’ll point him to here. He is really nicely handicapped and looking back what hedid in the Al Bastakiya, it’s anice mark. I’ll look at something around 2000m on dirtfor him.