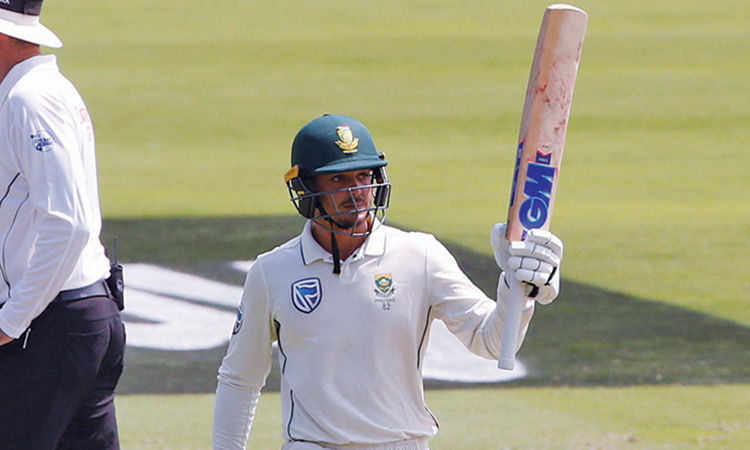 South Africa’s Quinton de Kock celebrates after reaching his half-century against England during play on day one of their first Test at Centurion on Thursday. Reuters

Quinton de Kock hit an aggressive half-century to lead a South African fightback on the first day of the first Test against England at SuperSport Park on Thursday.

South Africa were 187 for five at tea. They were in deep trouble at 111 for five after being sent in before De Kock (64 not out) and new cap Dwaine Pretorius (25 not out) put on an unbeaten 76 for the sixth wicket.

England were dominant when De Kock walked out at 97 for four, but the left-hander broke a spell of four successive maiden overs, which had included a wicket, when he took 14 runs off an over from Sam Curran, including three fours.

Skipper Faf du Plessis was caught at first slip off Stuart Broad in the next over but De Kock continued to attack, reaching his half-century off 45 balls with nine fours.

Although England captain Joe Root said he wanted to take advantage of “live grass” on the pitch, having opted for an all-seam bowling attack, loose strokes contributed to the wickets of both South African opening batsmen.

James Anderson, who became the first specialist bowler to appear in 150 Tests, took a wicket with the first ball of the match, a loosener down the leg side which Dean Elgar glanced to wicketkeeper Jos Buttler.

Aiden Markram clipped a ball from the left-armed Curran to midwicket for another soft dismissal.

Curran and Broad both took two wickets, with Broad ending a promising innings of 39 by Zubayr Hamza before dismissing Du Plessis in a later spell.

Ben Stokes was off the field for about 45 minutes after lunch, suffering from dehydration. Stokes was in the England team despite his father, Ged, remaining in a Johannesburg hospital with a serious illness. According to a team spokesman, there was no change to Ged Stokes’ condition, which was described as “stable” on Wednesday.

Three England players were ruled out because of illness -- Ollie Pope, Chris Woakes and Jack Leach. All three remained “in quarantine” at the team hotel, according to the England spokesman.

Earlier, a photographer got injured in front of the sightscreen and caused a delay to the start of the Test.

Christiaan Kotze was on assignment for Agence France-Presse when he tripped on the boundary line fence and lost his footing on a slippery pitch cover.

He was writhing in pain and was diagnosed with badly-sprained right knee ligaments and needed medical treatment on the spot before he was carried away on a stretcher, a report on AFP said.

Kotze’s wife Catherine helped him with his ground level camera. After treatment, he went to the press box. “I hope I didn’t cause Dean Elgar to lose concentration,” he was quoted as saying.

“But when I was limping past some English guys they thanked me for the wicket.” The start of the match was delayed by a few minutes and South Africa opener Elgar was out first ball to Anderson.

Close of play scores on the first day of the first Test between South Africa and England at SuperSport Park on Thursday.