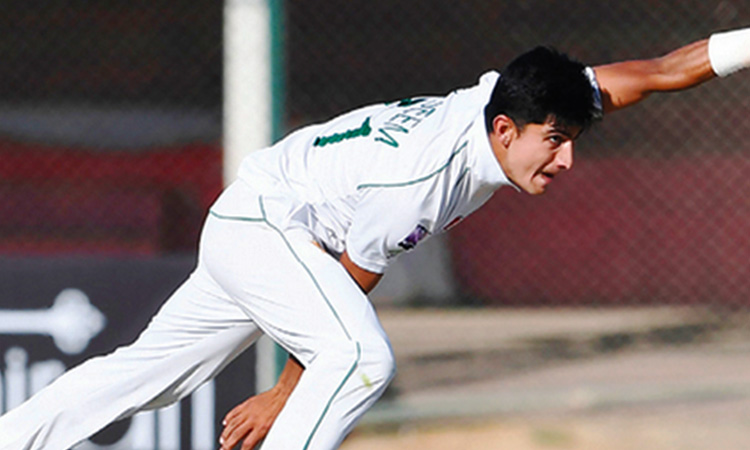 Pakistan’s Naseem Shah delivers a ball during the fifth day of the second Test against Sri Lanka in Karachi. Agence France-Presse

Pakistan’s Naseem Shah may be just a teenager but his fiery bowling has given him a top position on the bowling charts.

On Monday, Naseem grabbed 5-31 in Pakistan’s series-clinching win over Sri Lanka in Karachi to become the youngest fast bowler at 16 years 307 days to achieve the feat.

He broke the record of another Pakistan Mohammad Amir who also made his mark with his first five wicket haul at 17 years 257 days against Australia in Melbourne 10 years ago.

Naseem’s feat has prompted the cricket world to take notice of the precocious ability.

Belief in his talent, Naseem says, has been the key.

“I had belief in my hard work and talent so when I got the chance I tried my best,” said Naseem. “I am elated that my feat on a home ground and before my own people has contributed in the win.

“I know this is just the beginning and if I keep up the hard work more rewards will come my way.”

Naseem’s landmark moment capped a three-month fast track progress from a precocious talent to one of the leaders of Pakistan’s bowling attack.

He has been in the limelight for sometime but it was in October this year that national selectors decided to throw him in the deep when he took nine wickets in a domestic match.

Four days later he was on the plane to the Australia for the two-match Test series — a move described as ‘throwing a cub before the wolves.’

“He’s not as big as Dennis - Dennis was a big guy - but when he gets it right, he’s a handful. He’s very talented with his pace the key.”

Naseem made people take notice with his short burst of eight overs against Australia A, claiming Marcus Harris’s wicket with a sharp bouncer.

That was after he received the news of his mother’s death back home.

But he showed steely resolve as a week later he was played in the first Test in Brisbane.

He claimed dashing Australian opener David Warner twice, first off a no-ball on 56 and then on 154.

“He charged in, and there’s a superstar there,” said Warner.

“If Waqar can get a hold of them (Naseem and other young fast bowlers) and get their lines and lengths and their engines going, they’re going to be a force to be reckoned with in the future.”

It was a tough baptism for Naseem, who hails from the small town of Lower Dir, in the north-west Khyber Pakhtunkhwa province.

Naseem said his father was against his playing cricket.

“Those were tough days,” recalls Naseem. “My father used to say ‘why you play the sport of foreigners, instead study.”

But cricket was at the core of his life.

“There were not much facilities in my village so I used to play with tape ball. I watched Waqar and Shoaib Akhtar on television but I liked Shane Bond’s (New Zealand fast bowler) action.

“Then I moved to Lahore and played cricket there and it was there I got more opportunities and then I was selected for Pakistan Under-16.”

The rest is, as they say, history.

Waqar believes Naseem can go places with his talent.

“He knows what he’s doing and knows where to reach in cricket.”