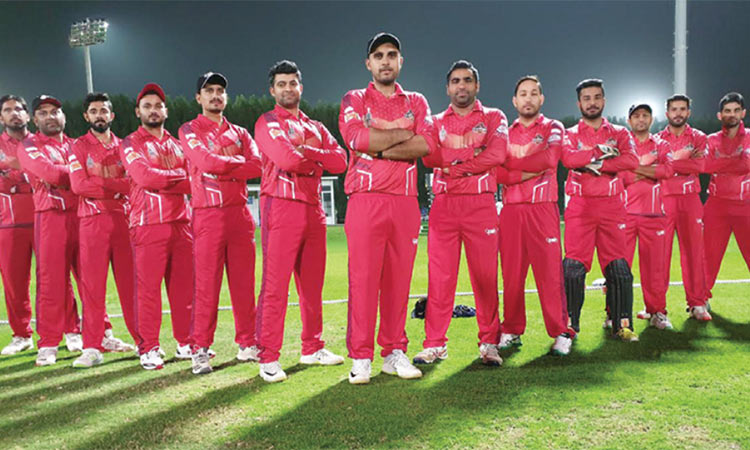 Karwan Strikers CC players pose for a picture prior to the start of their match against ANIB XI.

ANIB XI won the toss and elected to bat first. They lost two quick wickets with just nine runs on the board. Both the batsmen including Mohammed Afzal and ANIB XI skipper Basil Hameed were removed by Atif Ayoub.

Later, wicket-keeper Mani Danube (20) and Anfal PM (12) also returned to the pavilion while leaving ANIB XI struggling at 39 for four.

Sreekumar hit 52 off 33 studded with three boundaries and a towering six while Kareem scored 35 off 29 balls.

Asif Hayat added 13 before being getting run out as ANIB XI posted 151 for the loss of nine wickets from the allotted 20 overs. Ayoub, Zahid and Farhan claimed two wickets each.

In reply, Karwan Strikers were also in a spot of bother after losing their opener Furqaan at 19. Despite losing his partner, Taimoor Ali played a patient knock of 31.

Later, Jahandad Khan (65) and Amjad Gul (25) ensured the team remains on the track for victory. Usman Mushtaq and Sultan Ahmed added eighth runs each as Karwan Stikers overhauled the winning target with two overs to spare. Khan was adjudged as man of the match.

The tournament is being played under the auspices of Ajman Cricket Council.

Gaurav Uppal, founder of BS League, said: “We continue our work alongside Ajman Cricket Council to offer the opportunity to play competitive tournaments.

“I myself am a passionate cricketer, so I’m committed to providing quality cricket tournaments on turf wicket and grass ground in the UAE.”