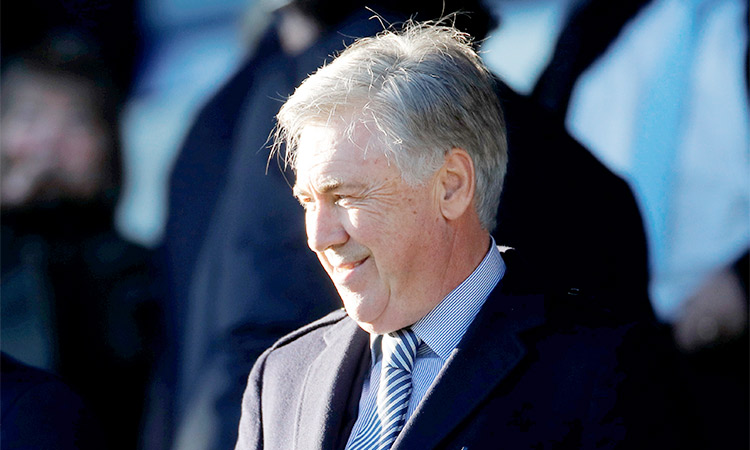 New Everton manager Carlo Ancelotti inside the stadium before their match on Saturday.

Everton appointed Carlo Ancelotti as the club’s new manager on Saturday, with the experienced Italian taking charge at Goodison Park on a four-and-a-half year deal.

Ancelotti, 60, will attend Saturday’s Premier League clash with Arsenal, but will not take charge until the Boxing Day visit of Burnley.

The three-time Champions League winning coach was sacked by Napoli earlier this month but comes with a trophy-laden CV from spells at a clutch of Europe’s top clubs, including Juventus, AC Milan, Chelsea, Paris Saint-Germain, Real Madrid and Bayern Munich.

His arrival is a coup for the Toffees, who are languishing in 16th place in the Premier League, just three points above the relegation zone.

“This is a great club with a rich history and a very passionate fan base,” Ancelotti said in a club statement.

“There is a clear vision from the owner and the board to deliver success and trophies. That is something that appeals to me as a manager and I am thrilled at the prospect of being able to work with everybody at the club to help make that vision a reality.” Caretaker manager Duncan Ferguson, who will take charge against Arsenal, will be part of Ancelotti’s coaching staff after impressing in beating Chelsea and drawing at Manchester United in his two previous Premier League games.

“I have seen from the performances in the last two weeks that the players are capable of so much,” added Ancelotti.

“The work Duncan has done is a great credit to him. Strong organisation, strong discipline and the right motivation are some of the key ingredients in football and I’m pleased that he will be part of my backroom team moving forward.” Ancelotti is used to dining at European football’s top table, but his immediate task will be to guarantee survival before trying to fulfil the ambitions of Everton’s majority shareholder Farhad Moshiri.

The British-Iranian businessman has ploughed in hundreds of millions of pounds over the past three years.