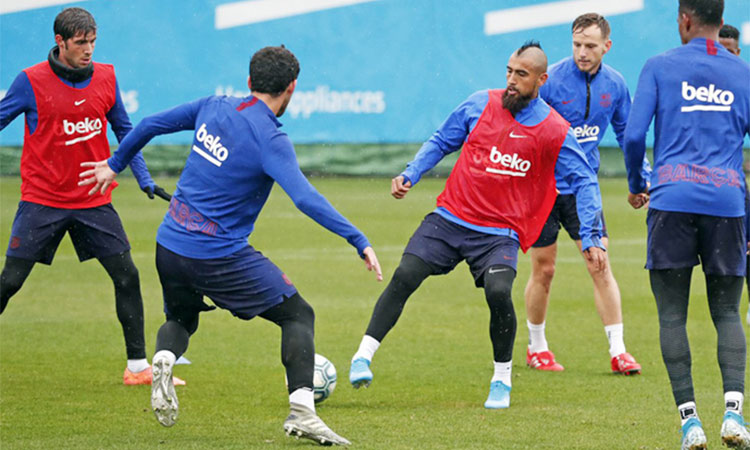 The first Clasico stalemate in 17 years means Barcelona will likely finish 2019 top of La Liga if they beat Alaves on Saturday, despite a distinctly underwhelming opening half of the season.

Barca have lacked purpose and clarity in recent months and three defeats in the league is already more than they endured in the entirety of their title-winning run last term.

“Grey, but surviving - Barcelona are still the leader,” read the headline in Madrid daily AS on Thursday.

None of their rivals have been able to take advantage, not even Real Madrid, who were the better team for long spells of a scrappy contest on Wednesday but failed to make it count.

Madrid have failed to take their chances in the title race too and are still level on points with Barcelona and two behind on goal difference after missing opportunities to jump above their rivals last weekend and again in midweek. It might be harsh to judge draws away at Mestalla against Valencia and then Camp Nou as slip-ups, yet a Barcelona team which has been in second gear and was without an injured Lionel Messi for several weeks is still sitting top of the pile.

“We deserved a little more but that’s football, we lacked a bit of ruthlessness in the final third,” Zinedine Zidane said on Wednesday night.

“We would have liked to win but it was even and the league is too,” said Ernesto Valverde.

When Zidane came under heavy pressure following a 1-0 defeat to Real Mallorca in October, he might well have taken this position, five points clear of third, ahead of the last game before the winter break. His team have motored in recent weeks and are unbeaten in 12 matches. It would be a surprise if they did not add another victory at home to Athletic Bilbao on Sunday. Madrid have momentum and the next Clasico is at the Santiago Bernabeu too.

“We are on a great run,” said Sergio Ramos after the game on Wednesday. “The dynamic is strong. We feel fresh and everything is positive.

“The season stops at the end of the year when, to be honest, we would like it to continue. But that’s how it is and we have to maintain the momentum after the break.”

If Barcelona have been disappointing, they might also have greater potential for improvement.

Messi is fit and firing again, Antoine Griezmann has shown signs he is finding his feet and Frenkie de Jong seems to get better every week. If a stumbling Barca can set the pace at the top, perhaps they could pull away if they hit their stride.

Atletico, who travel to Real Betis on Sunday, will hope to accelerate soon too, possibly with the help of a new striker in January to ease their chronic problems in front of goal.