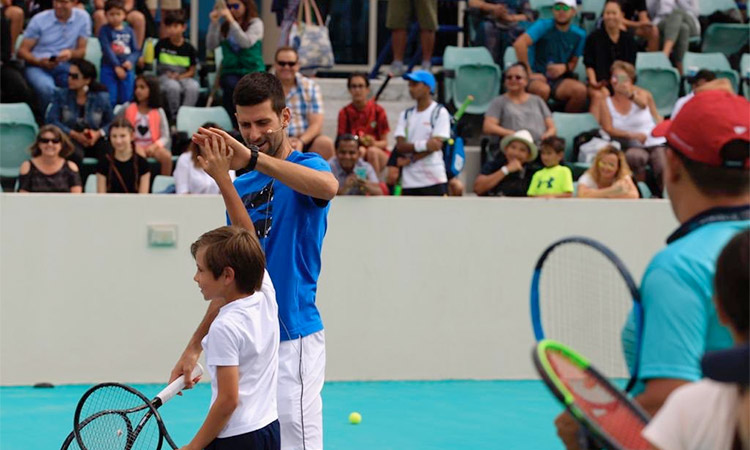 Tennis’ young guns are getting ‘dangerously close’ to breaking the domination of the ‘Big Three’ in the men’s game, (Roger Federer, Rafael Nadal and Novak Djokovic) says the Serbian star.

For only the third time in 16 years in the ATP Finals — the season-ending tournament in London — not featured at least one of the ‘Big Three’ after 21-year-old Stefanos Tsitsipas beat Federer 6-3 6-4 in the last four this year.

With Nadal and Djokovic falling by the wayside in the group stage, Tsitsipas lifted the title by beating Dominic Thiem in the final.

Nadal, 33, Djokovic, 32, and 38-year-old Federer have ended the year as the top three in the rankings.

Talking to the media ahead of the Mubadala World Tennis Championship, world No.2 Djokovic said the Greek youngster and his contemporaries, including Thiem, Alexander Zverev and Daniil Medvedev, are getting dangerously close to achieving that.

“I think it’s a logical and a natural cycle. Roger (Federer), Rafael (Nadal) and I were saying that it’s going to happen that we’re going to be replaced in the top three spots and the new guys are going to start winning Slams,” said Djokovic, a 16-time major champion.

“We’re trying to prolong that kind of change in men’s tennis, but it’s inevitable that it’s going to happen,” said the Serb, who is chasing a fifth title in Abu Dhabi.

Thiem played back-to-back finals at Roland Garros, Tsitsipas now won the year-end championships, Zverev won London the year before. They’re definitely out there challenging the best players in the world,” he added.

“They are already established top-five, top-10 players and our task is that doesn’t happen very soon but it seems like it’s coming closer and closer.”

Tsitsipas, who is also competing in Abu Dhabi, has expressed hopes of breaking the stranglehold of the ‘Big Three’.

Djokovic has had an excellent year, having clinched the season-opening Australian Open by defeating Nadal in the final before beating Federer in the final at Wimbledon.

Djokovic, who has 16 Grand Slam titles to his name, has developed a strong connection with Abu Dhabi, having claimed the MWTC crown four times. In the 2018 final, he defeated South Africa’s Kevin Anderson in a thrilling final, eventually winning 4-6, 7-5, 7-5.

Djokovic said that he hoped to hit the ground running as he prepares for what will be a grueling year of tennis, with the Mubadala Tennis Championship being the perfect start to his season.

“Abu Dhabi is a special place and one where I have tasted success consistently. The courts are great, and the atmosphere is thoroughly enjoyable,” said Djokovic.

Meanwhile, Djokovic said he is inspired by Andy Murray’s journey back from a career-threatening injury.

Djokovic watched Murray’s recently-released documentary that chronicled the Brit’s two-year battle with a hip issue that required multiple surgeries and was moved by what he saw.

Murray is planning on contesting next month’s Australian Open.

“I’ve seen his documentary about four, five days ago and it was tough to watch to be honest, as a tennis player, and as someone that knows him for a long time,” said Djokovic.

“To see what he has been through, I think it was a great insight into his last couple of years and the struggles he had, mental, emotional, physical.

“Just an amazing warrior that he is in life really, to be able not to give up after everything that has happened and all the recovery and preparations and trying to heal and play a couple of matches in the whole season and still after everything he’s been through in his career and having family at home, not give up on that and have support of the close ones, it’s really impressive and inspiring.”