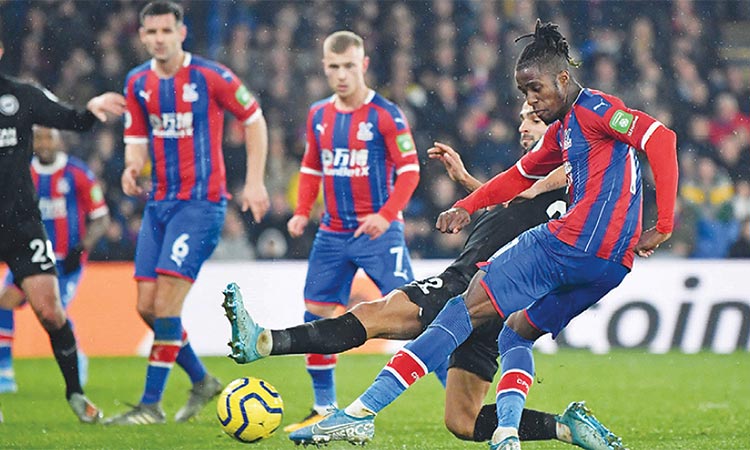 Wilfried Zaha’s equaliser lifted Crystal Palace up to ninth in the Premier League table as they shared the points in a 1-1 draw at home to Brighton on Monday.

Neal Maupay fired the visitors into a 54th-minute lead but Palace star Zaha drew the Eagles level against the Seagulls with a fine solo effort 15 minutes from time at Selhurst Park.

Palace have now moved above London rivals Arsenal in the table and Zaha was proud of the way his side stayed in the game against a Brighton team who had much the better of the play.

“It was a big game for both teams and I’m glad we got back in it -- if you can’t win, don’t lose,” Zaha told Sky Sports.

Brighton remained in 13th, five points above the relegation zone, and manager Graham Potter was pleased by the south coast side’s latest display.

“The performance was really, really good...You can’t control a game away from home much more than that,” said Potter before adding: “We know if there is one action from a really good player you can be punished.

“Our job is to accumulate points but knowing the competition is really fierce. We try to improve and see where that takes us.” For Palace, Christian Benteke made his first start since August while Jeffrey Schlupp’s hip injury meant Jairo Riedewald came in at left-back and Scott Dann also came in.

Martin Montoya and Yves Bissouma came in for Brighton, with Dale Stephens suspended, and Steven Alzate dropped to the bench.

Following a goalless first half, Brighton went ahead in the 54th minute when Maupay, controlled a cross from Leandro Trossard and let fly with his left foot from the edge of the box.

Palace rallied and were back on level terms in the 75th minute when Zaha, collecting the ball on the left, turned Montoya inside out and then unleashed a powerful shot past helpless Brighton goalkeeper Mat Ryan.