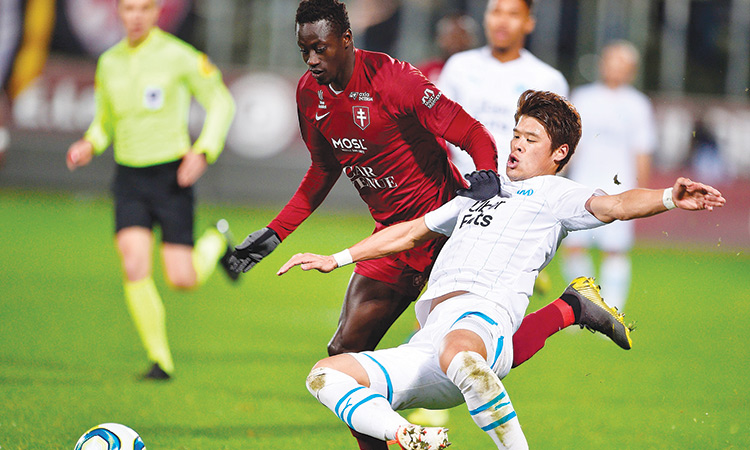 Marseille lost goalkeeper and captain Steve Mandanda to an ankle injury as their six-match winning run in Ligue 1 was snapped on Saturday following a 1-1 draw at struggling Metz.

France international Mandanda limped off on 32 minutes to be replaced by Yohann Pele, who conceded the opening goal at the Stade Saint-Symphorien when Opa Nguette scored just before half-time.

The 37-year-old Pele produced a superb save to keep out Habib Diallo’s second-half penalty before Nemanja Radonjic salvaged a point for Marseille with an equaliser on 70 minutes.

Andre Villas-Boas’ side remain four points behind leaders Paris Saint-Germain, who have two games in hand.

“It will be important to rebound with a victory against Nimes (next Saturday) because we lost two points tonight,” said Villas-Boas, who downplayed the severity of Mandanda’s injury.

“I think it won’t be too serious. We’ll see, the ankle isn’t too swollen. I hope it’s nothing too bad and he will be there for Nimes.”

Morgan Sanson drew a sharp save from Metz goalkeeper Alexandre Oukidja in the first half, with Mandanda then forced off after hurting his right ankle lunging for the ball after a heavy touch inside his area. His replacement was powerless to stop Metz taking the lead on 40 minutes when a fizzing cross from Fabien Centonze was steered home by Senegalese forward Nguette.

Metz were awarded a penalty early in the second half when Japanese defender Hiroki Sakai brought down Nguette — the decision upheld following a VAR review.

But Pele thrust himself brilliantly to his right to claw away Diallo’s spot-kick and keep OM in the game. Dimitri Payet rattled the post just past the hour but Marseille soon levelled when Radonjic combined with fellow substitute Valere Germain to turn in his fourth goal in his last five league games.

Germain nearly snatched a winner in stoppage time but his header was cleared off the line by Marvin Gakpa to preserve a point for Metz, who remain stuck in the bottom three.

Elsewhere, Nantes jumped to fourth after a seventh 1-0 win of the season away to Nimes courtesy of Imran Louza’s first-half strike.

Reims are fifth following a 1-0 victory at Toulouse as the league’s bottom club suffered an eighth defeat in a row.

Monaco drew 0-0 at Angers with Nice also involved in a goalless stalemate away to Brest, while the game between Amiens and Dijon finished 1-1.