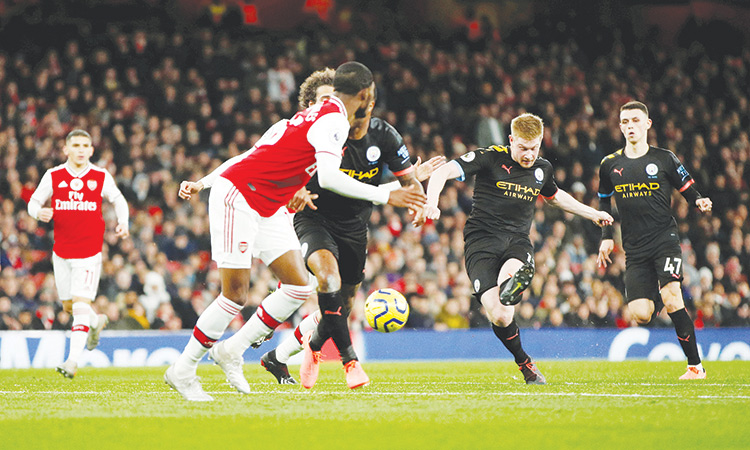 Kevin De Bruyne scored twice and teed up Raheem Sterling for Manchester City’s other goal as Arsenal crumbled to another humiliating 3-0 home defeat on Sunday.

Victory sees City close the gap on runaway leaders Liverpool back to 14 points and edge to within four of second-placed Leicester, who they host next weekend.

Arsenal, on the other hand, remain ninth on the back of just one win in their last 12 games in all competitions.

That victory came at West Ham on Monday, but if there was any hope a corner had been turned under caretaker boss Freddie Ljungberg for the Gunners, it was quickly quashed by the brilliant De Bruyne.

Arsenal could have taken the lead even before the Belgian opened the scoring after just 90 seconds.

Gabriel Martinelli retained his place ahead of Alexandre Lacazette after scoring for the first time in the Premier League on Monday and got the better of Fernandinho and Nicolas Otamendi to muscle his way in on goal before his shot was blocked by Ederson.

City broke straight up the other end and Gabriel Jesus’s low cross picked out De Bruyne to stroke the ball into the roof of the net.

Pep Guardiola’s men had been ruthlessly cut apart on the counter-attack in losing to Manchester United last weekend and were conscious not to make the same mistake again as they allowed Arsenal possession for large spells before breaking at speed.

The visitors doubled their lead just 15 minutes in with De Bruyne this time the creator as he carried the ball forward before squaring for Sterling to slot home his 16th goal of the season.

De Bruyne showed his superior quality to any other player on the pitch again five minutes before half-time as this time he curled into the bottom corner on his weaker left foot from outside the box.

And only a brilliant save from Bernd Leno denied the City midfielder a first half hat-trick moments later as the German’s fingertips turned another long-range De Bruyne effort onto the post.

Arsenal’s preparation for the game had been disturbed by the controversy surrounding Mesut Ozil’s support for the Muslim minority Uighurs in Chinese province Xinjiang.

Chinese state broadcaster CCTV pulled coverage of the match and Arsenal distanced themselves from Ozil’s comments.

Meanwhile, Mason Greenwood came off the bench to rescue Manchester United as the teenage striker’s late equaliser secured a 1-1 draw against Everton on Sunday.

Ole Gunnar Solskjaer’s side fell behind to Victor Lindelof’s controversial first half own-goal after United’s appeals for a foul on David de Gea were ignored by VAR.

But Greenwood, introduced in the second half, underlined his vast potential with a clinical strike 13 minutes from full-time.

The 18-year-old is the third youngest player to score a Premier League goal at Old Trafford after former United forwards Federico Macheda and Danny Welbeck.

Bradford-born Greenwood, a product of United’s youth academy, now has seven goals in his breakthrough season after netting twice in his previous appearance against Alkmaar in the Europa League on Thursday.

This was his second Premier League goal after his strike against Sheffield United in November and his rapid progress is a bright spot in a difficult season for Solskjaer’s sixth placed team.

It was fitting that Greenwood scored in the 4,000th senior match in succession in which at least one youth graduate was represented in United’s first-team or matchday squad, an extraordinary record stretching back over nine decades.

Earlier, Jan Vertonghen’s stoppage time header continued Tottenham’s turnaround under Jose Mourinho as Spurs moved up to fifth with a 2-1 win at Wolves.

Mourinho’s men were largely outplayed at Molineux, but were ruthless with their chances to inflict Wolves’ first league defeat in 12 games.

Spurs can now move into the top four before Christmas if they beat Chelsea at home next weekend and Mourinho has his sights of qualifying for next season’s Champions League.