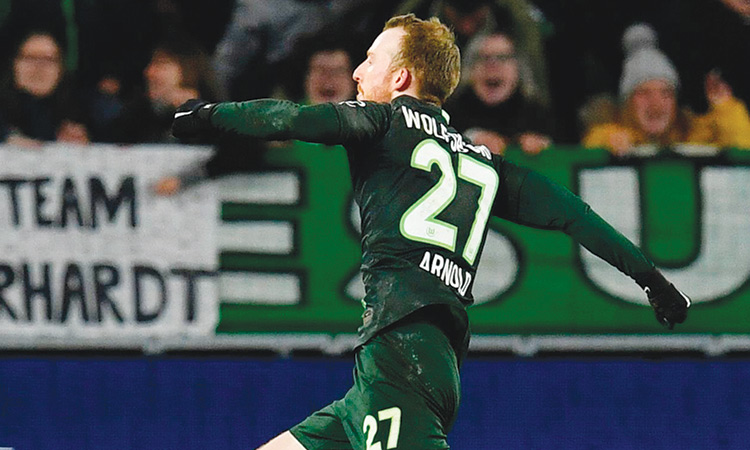 Wolfsburg’s Max Arnold celebrates after scoring a goal against Borussia Moenchengladbach during their Geraman League match on Sunday. Agence France-Presse

Borussia Moenchengladbach failed to return to the top of the Bundesliga on Sunday after Max Arnold’s thundering injury time volley consigned them to a 2-1 defeat at Wolfsburg.

Moenchengladbach arrived at the Volkswagen Arena knowing a third straight win would send them back to number one spot above RB Leipzig who hammered Fortuna Duesseldorf 3-0 on Saturday.

Arnold’s effort 42 seconds into added time came after Breel Embolo had responded for the travelling side following Xaver Schlager’s opener within the first quarter of an hour.

Things started poorly for the visitors, who looked off the pace after their midweek Europa League exit.

The hosts opened the scoring after 13 minutes, with Schlager side-footing into the net from close range to score his first of the season.

Gladbach hit back two minutes later however, with Switzerland forward Embolo smashing in a looping cross from Alassane Plea at the back post to make it 1-1.

From there, the encounter turned scrappy, with six yellow cards handed out, three in each half, as each side pushed for a winner.

With the clock winding down, Arnold met a poorly cleared ball at the edge of the box and struck the ball cleanly past goalkeeper Yann Sommer to claim the three points.

The Wolves move above Hoffenheim to eighth place, while Gladbach fall back to second after 10 weeks on top of the table and are now two points behind leaders Leipzig.

The visitors opened the scoring after just two minutes, with Patrik Schick volleying in a cross from Konrad Laimer.

Timo Werner then scored a penalty in the 58th minute to bring up his 16th goal of the season, before defender Nordi Mukiele put the game beyond doubt in the 75th minute with Leipzig’s third.

Nagelsmann said his side’s focus was not directed at securing top spot, but rather at how things can be improved ahead of Tuesday’s clash with Borussia Dortmund.

“We missed a few chances in the first half. We controlled the game really well in the second,” he said.

“These are three very important points. We were able to hold something back at the end with Tuesday’s big game in mind.”

Meanwhile, Coutinho has finally lived up to Bayern Munich’s high hopes for the Brazil playmaker.

Coutinho scored a hat trick and set up two more goals to help Bayern end their two-game losing run in the Bundesliga with a 6-1 rout of Werder Bremen on Saturday.

“That was his game,” said fellow goal-scorer Robert Lewandowski, who grabbed two.

Substitute Thomas Muller scored the other goal as Bayern bounced back from successive 2-1 defeats to Monchengladbach and Bayer Leverkusen.

Bremen’s visit came just at the right time for the seven-time defending champion. Bremen had lost their previous 20 competitive games against Bayern, 17 in the league and three in the German Cup.

Coutinho gave a demonstration of what Bayern had been expecting when it signed him on loan with a purchase option for 120 million euros ($133 million) from Barcelona in the offseason.

“It was fun for everyone who was in the stadium,” Bayern coach Hansi Flick said of the 27-year-old Coutinho. “The team was delighted for him, that he produced such a performance on the pitch. Three goals scored, two made - that was simply class!”