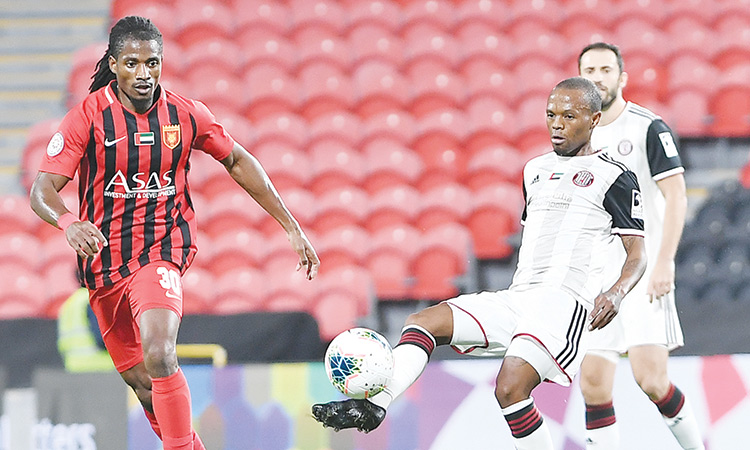 Al Jazira and Fujairah players in action during their Arabian Gulf League match on Sunday.

Abderrahman Meziane, Mohaned Salem, Caio Canedo and Jamal Maroof were on the target for Al Ain while Ajman’s lone goal was scored by Vander Vieri.

Ajman took the lead through Vander in the first three minutes of the game. He curled the ball into the net off a pass from Mohammad Bin Yousuf.

After taking the lead, Ajman went into the defensive mode. They managed to keep Al Ain at bay for 25 minutes.

A frustrated Al Ain kept on trying to break the deadlock and restore parity. But they succeeded in the 28th minute, when Mezaine right-footed a shot from the centre of the box to the middle of the net to put Al Ain at par. He was assisted by Kadjo Laba. After restoring the parity, a resurgent Al Ain started attacking more fiercely.  In the 44th minute, Al Ain doubled their lead when Mohaned Salem left-footed a shot from the centre of the box into the net off a corner kick to make it 2-1 at the half time.

Ten minutes after the half-time, Al Ain struck once again to extend the lead to 3-1. This time around, Caio Canedo put the ball straight into the net from a close range off a pass from Tsukka Shiotani. An injury time goal in the dying moments by Jamal Maroof made it 4-1.

After going down by three goals, Ajman failed to curtail the lead and Al Ain cruised to a comfortable victory.

Al Jazira tried to take an early lead through Omar Abdulrahman, whose left-footed strike went inches wide after it got deflected off Fujairah’s defender in the ninth minute.

The Pride of Abu Dhabi opened the scoring when Mohammed Fawzi overpowered Fujairah defender to the ball, and smashed it into the top corner to make it 1-0.

After the win, Al Jazira sit fourth with 17 points ahead of their critical clash against Al Wasl next week. Meanwhile, Fujairah remained in the relegation zone as they occupy the 13th spot with just six points and will host Bani Yas in matchweek 10 of the Arabian Gulf League.

Elsewhere, in a mid-table clash, Al Dhafra were held by Ittihad Kalba 1-1 at the Hamdan Bin Zayed Al Nahyan Stadium.

Meanwhile, Shabab Al Ahli will look to maintain their winning momentum when they take on Al Wasl on matchday two of the ninth round of the Arabian Gulf League (AGL) on Monday.

Shabab Al Ahli coach Rodolfo Arruabarrena stressed that their focus is on the next game in the domestic league and not on Asian Champions League (ACL) matches.

“The Asian Championship lasts for more than a month, we must focus on the current matches and prepare the team to be able to win in these matches. It is better to take every game one-by-one and deal with each match separately,” said Arruabarrena.

“We always focus on our team, and we must rely on ourselves to improve the team position. We do not deny that the results of other teams have a bearing on our standings and qualification in certain tournaments, but the most important and primary focus must be on the performance of our team,” he explained as Shabab Al Ahli are hot on the heels of leaders Sharjah. They are second in the standings with 19 points from eight games. They have won six, drawn one and lost one, keeping pressure on Sharjah.

He also ruled out that the result of Arabian Gulf Cup match between the two teams will have any bearing on this game. In an Arabian Gulf Cup quarter-final match, Red Knights trounced Al Wasl 5-1 with a dominant display.

“I do not think that the next match will be affected by the outcome of our last meeting in the cup. After that each team has played a league match and moved on. I hope we can see real football between the two teams, which includes a large group of distinguished players.

“The league matches certainly different from that of the Cup’s in every way. The strongest team on the field is the one who wins on a given day. Such close contests are usually decided by the small details that occur during the match,” asserted Arruabarrena.

He also said that both the teams are well aware of each other’s weaknesses and strengths.

“As we continue our journey in the league, the next match will be against a team, whom we know well. The game is very important and everyone should focus fully on the game and must carry out all the tasks assigned to them to achieve a positive result,” he concluded.

Shabab Al Ahli have been drawn against the Asian champions Al Hilal of Saudi Arabia alongside Uzbekistan’s Pakhtakor.