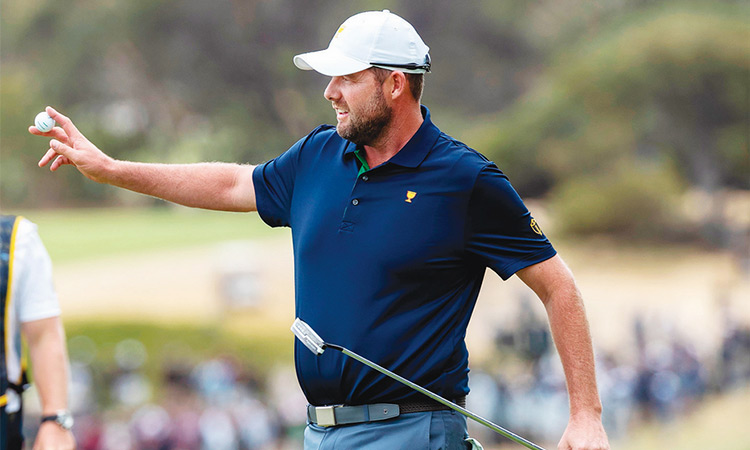 The pair were five down against Justin Thomas and Rickie Fowler after 10 holes in the afternoon foursomes, or alternate shot format, but fought back to halve the tie at the 18th in a demoralising blow for the US.

Woods’ team won the foursomes 3-1 after losing the morning fourball matches 2.5-1.5 to leave the biennial showdown on a knife-edge ahead of Sunday’s 12 singles. The Internationals lead 10-8 as they search for a first victory since 1998 — their lone win at the match play event.

“It was unbelievable. You talk about coming back from the dead — 5-down and 4-down through eight and nine holes, come back and get that result, I mean, that’s a turnaround. That gets momentum,” said Els.

“I mean, we had a lead, it looked like it was going to be wiped away, and the guys absolutely played with their guts and I could not be more proud and more happy for those guys in that cabin tonight.”

World number four Thomas had been in a rich vein of form around the challenging Royal Melbourne sandbelt course, first alongside Woods and then with Fowler before he ran out of steam.

He said he was “speechless” after throwing away the match and it was “unacceptable for us to get a half a point”.

In contrast, Leishman was over the moon, calling the comeback “pretty awesome”.

“It’s going to be a big momentum gainer for the Internationals,” he added.

Despite the Thomas-Fowler meltdown, playing-captain Woods said the day was a win for his team.

“At one point it looked like we were going to be down 1-9, and for the International team only to get one point from that point on, for us to fight back and get eight points, was a huge, huge win for us today,” he said.

After relying heavily on Thomas over the first three sessions, where he won three points, his teammates finally stepped up to help the US clinch the foursomes and stay in the hunt.

Matt Kuchar and Tony Finau halved their match with South Korea’s An Byeong-hun and Chilean Joaquin Niemann after being 2-up for much of it.

They blew away the Americans courtesy of Matsuyama’s cool head and Pan’s hot putter and laser-like iron play -- the pairing’s second win.

“I just feel we have a chemistry. It’s hard to explain. Our game fits each other and that really helps,” said Pan.

The match was marred by an altercation between Reed’s caddie Kessler Karain and a fan, who was shoved as tensions boiled over after endless barracking of the player by spectators.

Reed was docked two strokes for improving his lie in sand in the Bahamas last week, causing Smith to brand him a cheat and he has been targeted by fans in Melbourne.

“I got off the cart and shoved him, said a couple things, probably a few expletives,” Karain said in a statement to broadcaster ESPN on the incident.

The PGA Tour banned him from carrying Reed’s bags on Sunday.