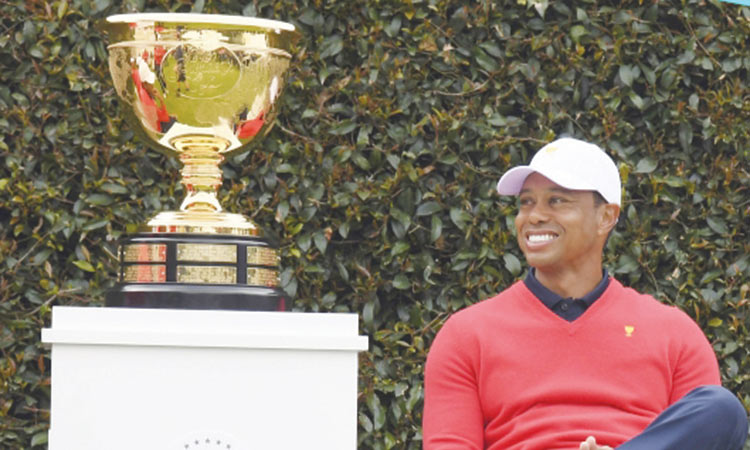 US team captain Tiger Woods waits for a photo shoot ahead of the President’s Cup Golf tournament in Melbourne, Australia, on Wednesday. Associated Press

Captain Tiger Woods will lead from the front when the United States begin their Presidents Cup defence after Wednesday picking himself and Justin Thomas for the opening fourball match at Royal Melbourne.

“I think from our side, we had a game plan, who we wanted to start out, and we were committed to putting Justin and myself out there, and that’s who we’re rolling with,” said Woods.

“I got a chance to play all of yesterday. Played a little bit today. Just to try to get a feel for this golf course.

“It is quick and it has dried out and hopefully the forecast will hold for each and every day. The preparation is very simple.” Vice-captain Fred Couples said ahead of the draw that he expected Woods would play at least three matches over the four days of the biennial matchplay showdown.

Woods has a record of 24 wins, 15 losses and one half in matches at the Presidents Cup, second only to Phil Mickelson’s record of 26 wins.

Steve Stricker will be captain while he is on the course. Woods resisted any temptation to leave Patrick Reed on the sidelines for the first day’s pairings after a row sparked by the two-stroke penalty for moving sand and improving his lie in the Bahamas last week.

But International captain Els did omit Australian Cameron Smith who became embroiled in the squabble by calling Reed a cheat.

China’s Li Haotong and Americans Rickie Fowler and Matt Kuchar are the other player to miss out on Thursday’s action.

Reed will partner Webb Simpson against Japan’s Hideki Matsuyama and Taiwan’s debutant CT Pan in match four on a course that has a reputation for having some of the fastest greens in the world.

They will be followed by veteran Australian Adam Scott, like Woods in his ninth Presidents Cup, joining South Korea’s debutant An Byeong-hun against Bryson DeChambeau and Tony Finau.

The final match pits another newcomer in Mexico’s Abraham Ancer and experienced partner Louis Oosthuizen of South Africa against the big-hitting duo of US Open champion Gary Woodland and former world number one Dustin Johnson, who is playing his first event since knee surgery in September. Els holds the course record of 60 set in 2004 while Woods sank the winning putt for the United States at the venue in 2011.

Saturday is a crunch day with four fourballs and four foursomes matches before 12 singles clashes on Sunday.

With one point awarded for a win in each match the first team to 15 1/2 points will secure the cup.