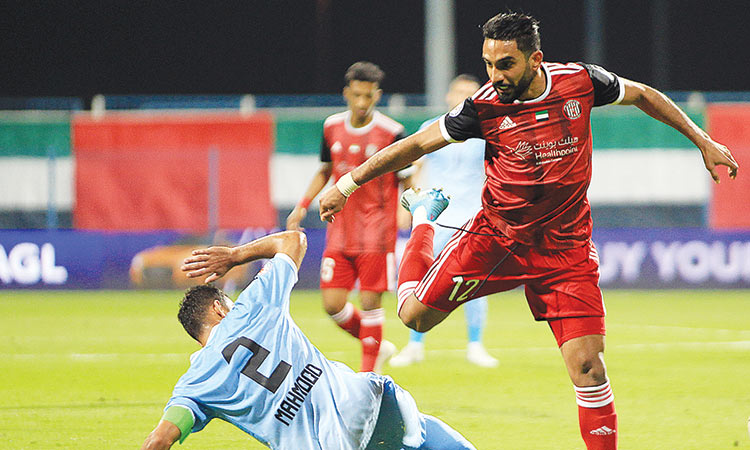 Players of Al Jazira and Hatta in action during their Arabian Gulf League match on Wednesday.

Sharjah started on the front foot as they nearly took the lead in the 13th minute, when Omar Jumaa went up the right flank and sent a low cross to Ricardo Gomes, who controlled the ball inside the box, however, his shot went just wide over the bar after a deflection off Bani Yas’ defender.

The King continued to dominate position and four minutes ahead of the halftime whistle, Igor Coronado squared the ball to Ryan Mendes, who cut on his right and drilled it into the bottom corner, but his effort was parried away by Fahad Al Dhanhani.

Two minutes past the one-hour mark, the Sky Blues responded through Sultan Al Shamsi, whose long range volleyed strike from the edge of the box went inches wide.

Bani Yas wasted a glorious chance to break the deadlock in the 74th minute after Pedro Conde’s right footed powerful strike cannoned off the woodwork following a brilliant solo run from the Spaniard.

After the draw, Sharjah remain on top of the league table with 20 points.

Meanwhile, Al Dhafra coach Vuk Razovic congratulated his team after a 2-0 victory against Khorfakkan in the eighth round match of the Arabian Gulf League match on Tuesday.

Razovic said: “I want to congratulate my team for the victory. Our players did a wonderful job and executed the plans very well. They played exactly as we wanted them to.

“In the first twenty minutes we spurned a few chances of scoring a goal but after the first goal was scored in the 30th minute things became easier for us.”

“We were winless in last three matches and this one is very special as it will take the pressure off us in the next matches. Though there are no easy matches all the games are important and tough but we heaved a sigh of relief after the win as it will give us a little buffer,” explained the Serbian.

After the victory, Al Dhafra have provisionally moved to seventh spot in the standings with 10 points from eight games. They have won three, lost two and drawn three.

Justifying the two goals by defenders, he said: “The first one came from a corner kick while the second came through a counterattack, which was not expected at times. Sometimes we plan different things and it turns out to be different.”

Explaining about the injury of Mohamed Hamdan, the coach said: “He is not injured. He was just tired and requested me to replace him with a fresh player to finish it off.” Meanwhile, Khorfakkan coach Goran Tovigdzic lamented the loss as they failed to stop the skid.

“We are in a dangerous situation. It is not a good situation to be in. We will have to fight and come out of this. There are still a lot of matches to be played and we will work hard for our survival,” he said.

Khorfakkan are yet to open their account in the Arabian Gulf League.