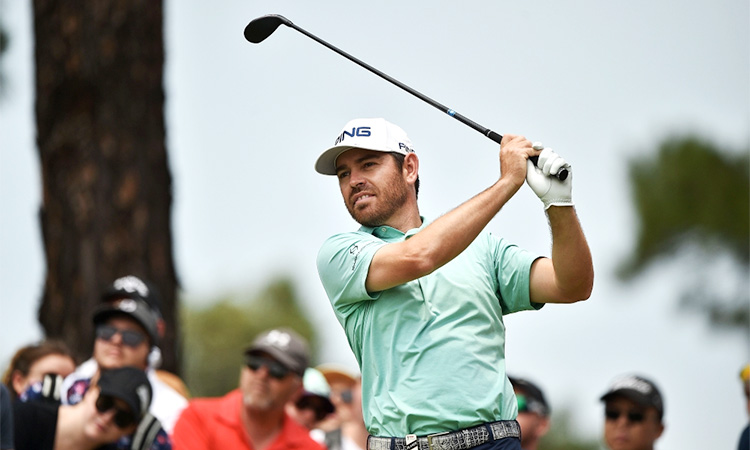 Louis Oosthuizen came within a shot of forcing the battle for the Stonehaven Cup into a playoff at The Australian Open when he sealed a sizzling five-under-par 66 with an eagle at the 18th in the final round.

Louis Oosthuizen said his late charge at the Australian Open has given him a big boost of confidence heading into this week’s Presidents Cup clash against Tiger Woods’s United States team at Royal Melbourne.

The 2010 British Open champion came within a shot of forcing the battle for the Stonehaven Cup into a playoff at The Australian Golf Club on Sunday when he sealed a sizzling five-under-par 66 with an eagle at the 18th in the final round.

Australian Matt Jones held his nerve to secure the trophy for the second time but Oosthuizen thought his time in Sydney had been perfect preparation for his fourth Presidents Cup campaign.

“I used this week as preparation for next and obviously, Aussie Open is a great event to play,” the 37-year-old told reporters.

“First time over here, we had a good time, got the family here. But I’ll take a lot of confidence out of this and hopefully we can pull it off next week.

Oosthuizen teamed up with fellow South African Branden Grace in 2015 to become the only International pairing to earn four points in a single Presidents Cup and has a 7-5-3 win-loss-tie record in the biennial competition.

The mild-mannered world number 20 was not too keen to get involved in the hype over US player Patrick Reed’s widely-condemned rule violation at the Hero World Challenge over the weekend.

“I think the crowd is going to have a nice time with him,” he added.

“(But) we’re focused on what we want to achieve and what we want to do. He brought those things on himself so I can imagine he’s going to have a tough time next week with the crowd.” What the largely inexperienced International team captained by Oosthuizen’s compatriot Ernie Els will be trying to achieve at Royal Melbourne is a second win in 13 editions of the biennial contest.

Meanwhile, US captain Tiger Woods attempted to draw a line under Reed’s rules violation at the Hero World Challenge over the weekend when his team touched down in Australia on Monday for this week’s Presidents Cup.

The penalty meant the 2018 Masters champion missed out on a chance to force a playoff against winner Henrik Stenson at Albany Golf Club, but perhaps more damaging was the widespread condemnation of his actions.

A jet-lagged Woods was asked about the incident after making the long journey to Australia for the 13th edition of the biennial contest at Royal Melbourne, which starts on Thursday.

“Yes, I have spoken to Pat about it, it’s behind us, we’re onto this week, we’re focused on going against this great International team here,” the 15-times major winner told reporters at the official launch of the tournament.

“As we all know, Pat was penalized and that was it, end of story. Unfortunately, he missed the playoffs by those two shots but we’re looking at this week.”

Some Internationals players have suggested Reed might get some flak from the crowd over the incident but Woods said he thought the famous Australian love of sport would ensure a great atmosphere for the contest.

Elsewhere, in Mauritius, Danish teenager Rasmus Hojgaard won the Mauritius Open on the third extra-hole of a play-off on Sunday to become, at 18, the third youngest winner in European Tour history.

He birdied the last to go 19-under alongside Italian Renato Paratore and Frenchman Antoine Rozner.

After missing an eagle putt for the title on the first trip back up the par five 18th and halving the hole with Rozner at the second attempt he claimed his maiden title third time around.

Only Italian Matteo Manassero, who won twice as a 17-year-old - and New Zealander Danny Lee have won on the European Tour at a younger age.

“This is a dream come true,” he told the EPGA’s official website.

“It’s amazing. To be on the European Tour so early is a dream come true and to be a winner now, it’s incredible. I can’t put it into words. I’m looking forward to the next challenge.

“I just tried to be patient and set up as many birdie chances as possible and see if I could hole putts. I had nothing to lose in this position (the play-off), it was just a driver all day. I hit three good approach shots into 18 and got it done on the third hole.”