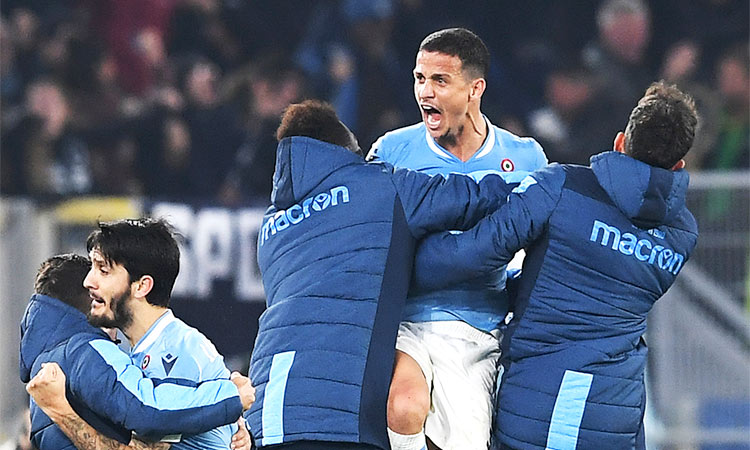 Lazio’s Luiz Felipe celebrates with team-mates after scoring a goal against Juventus during their Italian League match on Saturday. Reuters

Lazio handed Italian champions Juventus their first loss of the season 3-1, to leave the title race wide open on Saturday.

With winter break approaching, eight times champions are on the second spot, trailing by two points to leaders Inter Milan after 15 matches.

Meanwhile, third-placed Lazio closed the gap on Juventus to three points after their first against the Italian giants since December 2003.

Juventus took the lead in the 25th minute through Cristiano Ronaldo when the Portuguese prodigy tapped the ball into the net off a pass from Rodrigo Bentancur.

Juan Cuadrado’s sending off for a foul on Manuel Lazzari after 69 minutes proved to be the turning point. Lazio took control as Sergej Milinkovic-Savic connected with a Luis Alberto assist to fire in a stunning goal.

Juventus had been the only team left in Europe’s top leagues to remain unbeaten in all competitions this season.

Carlo Ancelotti ruled out resigning from his position as last year’s Serie A runners-up Napoli saw their win-less run reach seven games with a 1-1 draw at struggling Udinese.

Kevin Lasagna scored for Udinese after 32 minutes, picking up a Seko Fofana cross after the Ivorian beat defender Kalidou Koulibaly, to beat Alex Meret in the Napoli goal.

But Piotr Zielinski pulled the visitors level after 69 minutes as Napoli held on for just their fifth point in their last seven games.

Ancelotti’s side are seventh in the league -- 17 points behind leaders Inter Milan -- and will bid to seal a Champions League last 16 berth at home against Genk next week.

Berat Djimsiti grabbed a late winner as Atalanta came from behind twice to seal a 3-2 victory over 10-man Verona and stay in touch with the Champions League places.

Atalanta are sixth, one point behind fourth-placed Roma, who occupy the final Champions League spot after their goalless draw at Inter Milan on Friday. The hosts were pushed hard by Verona, coached by Croatian Ivan Juric, a former player and assistant manager to Atalanta coach Gian Piero Gasperini at Genoa.

Italian forward Samuel Di Carmine fired the visitors ahead after 23 minutes, and completed his brace after 57 minutes.

Atalanta forward Josip Ilicic limped off with a muscle injury with Ruslan Malinovskyi coming on for the hosts after half an hour.

The Ukrainian pulled a goal back for the Bergamo side before the break, with Luis Muriel getting the equaliser from the penalty spot after 64 minutes.

Verona went a man down when Pawel Dawidowicz was sent off for a second yellow card five minutes from time.

Meanwhile, Genoa’s veteran striker Goran Pandev scored a remarkable goal from near the halfway line but turned villain in the second half when he was booked twice in four minutes and sent off in a dramatic 2-2 draw at Lecce on Sunday.

Genoa, who led 2-0 at halftime, finished with nine men in the Serie A relegation battle while Lecce drew 2-2 for the third successive home game.

Pandev struck in the 31st minute when Lecce goalkeeper Gabriel sent a clearance straight to him and the North Macedonian controlled the ball on his chest and immediately sent a long, looping shot into the net from around 40 metres.

The 36-year-old also won the penalty which Domenico Criscito converted in first-half stoppage time to make it 2-0.

Genoa nearly had a third in the 57th minute when Kevin Agudelo had only Gabriel to beat but the Brazilian stuck out his foot to save the shot in what proved the game’s turning-point. 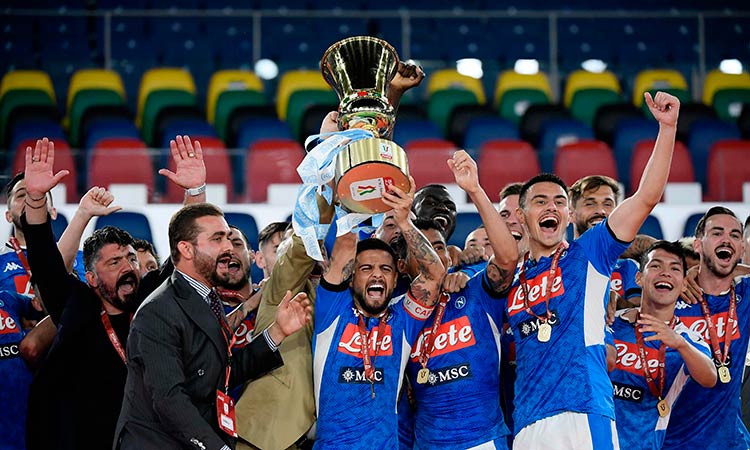 Paulo Dybala and Danilo both missed their spot-kicks for record 13-times Italian Cup champions Juventus with Arkadiusz Milik slotting in the winner for Napoli past veteran keeper Gianluigi Buffon.