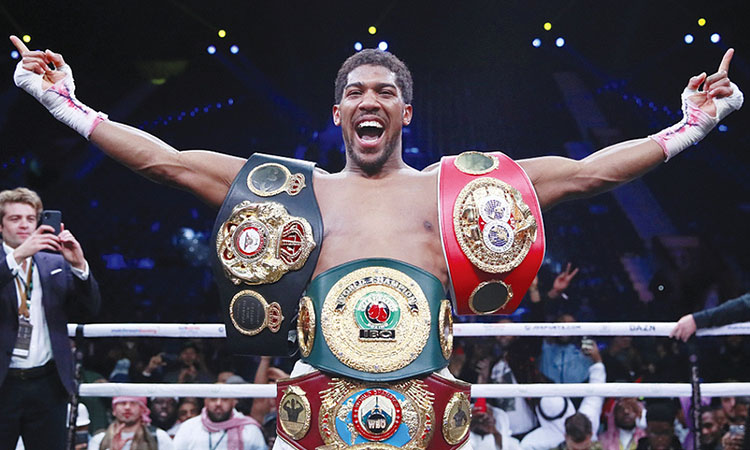 Andy Ruiz blamed three months of partying for his one-sided world heavyweight championship defeat to Anthony Joshua on Saturday, admitting he had failed to train seriously for his first title defence.

The 30-year-old Mexican-American stunned the world in June when he floored Joshua four times on the way to a sensational upset victory in their first fight at Madison Square Garden.

Ruiz had drawn gasps of disbelief on Friday when the weigh-in revealed he had ballooned to 283 pounds (128.4 kilograms), fully 15 pounds heavier than his fighting weight six months ago.

Ruiz’s poor conditioning was ruthlessly exposed by Joshua on Saturday, who nimbly outboxed the chubby champion.

“Three months of partying and celebrating affected me, what can I say?” Ruiz told reporters after the fight.

Asked what he’d do differently if granted a rematch with Joshua, Ruiz replied: “Listen to my coach. Listen to my dad. And take it more seriously.”

Ruiz, who was granted a ritzy homecoming parade in his Californian hometown of Imperial following his win in June, said he had started his training camp for the rematch too late. Trainer Manny Robles had wanted Ruiz back in the gym in July. Ruiz only started his camp in September.

Robles meanwhile refused to point the finger at Ruiz.

“You’ve got to be with your fighter 100 percent,” he said. “I’m not the first coach where situations happen in camp. I have to apologise to him because this is a team effort and when you don’t win it hurts. It always hurts.”

Ruiz, however, was able to take encouragement from the fight, insisting he would be a different proposition in a third encounter.

“For being out of shape I did pretty good, I took all his shots,” he said. “I got him a few times... If we’d have gone toe to toe... For the trilogy I know I’m going to be a lot better. Being overweight, I wasn’t fluid enough, I wasn’t moving the way I wanted to move. I think if I’m lighter I’m going to let my hands go and be a completely different fighter.”

Meanwhile, Joshua would not be drawn on his future plans after regaining his world heavyweight titles from Ruiz on Saturday.

The British star won back his WBA, IBF and WBO belts with a one-sided unanimous defeat of Ruiz in Diriyah outside Saudi Arabia’s capital.

The victory reinstates Joshua as a major player in boxing’s most glamorous division, and instantly renews speculation about a possible unification superfight with WBC champion Deontay Wilder.

But Joshua, 30, said while he remained open to a fight with the unbeaten Wilder, he would not “chase” the fight.

“It’s difficult to unite them,” said Joshua, who had seen negotiations with Wilder’s camp fall flat several times before his defeat to Ruiz in June.

“We’ll see what happens. Chasing that fight wasn’t playing to my benefit, so I’m going to let the path takes it course. When the opportunity presents itself to become unified heavyweight champion I’ll take it.”

Ruiz meanwhile is eager for a third meeting with Joshua. Although Joshua indicated he would be happy to face the Mexican-American again, that fight is unlikely to happen anytime soon.

“We are going to celebrate. Anthony Joshua is an amazing ambassador for the sport. Tonight, in Saudi Arabia, he becomes the two-time heavyweight champion of the world and that is beautiful.

Joshua meanwhile defended his cagey tactical style, saying he had consciously avoided being sucked into a slugfest against the hard-hitting Ruiz.

“There were times when I looked in Andy’s eyes and I wanted to put my fist through his head,” Joshua said.

“But this is boxing. It’s dangerous. I had a gameplan, I had a strategy and I wanted to follow it through. I can knock people out when I want to, and I can box when I want to. Tonight was just about winning. If I box for the crowd, or box for other people’s opinions, I might not have been victorious. So I’m just going to follow my instincts and box for myself.”