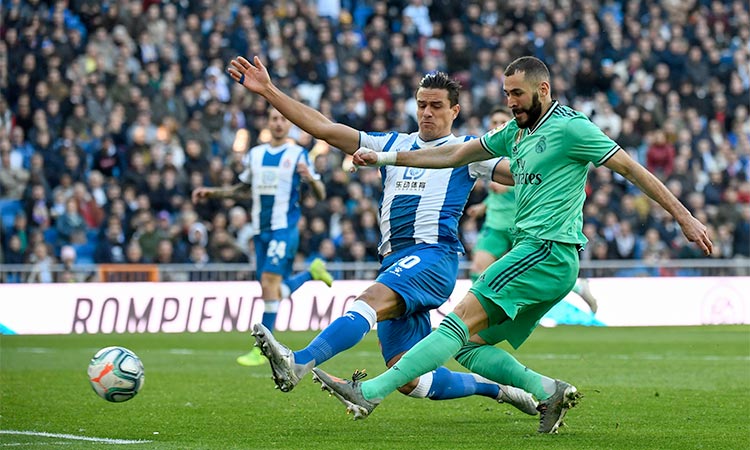 Karim Benzema stepped up to lead Real Madrid’s charge against Espanyol in the absence of Eden Hazard and Gareth Bale on Saturday. Benzema smashed one goal and helped set up the second one as a resilient Real cruise past Espanyol 2-0. Real wore a green kit to show their support toward the climate change that has of late become a global issue across the world.

Victory has pushed the Zinedine Zidane’s side provisionally to the top of the table before their arch-rivals Barcelona take on Mallorca few hours later.

Espanyol, who have not tasted a victory in straight games in the league and remain at the 19th spot. Hazard is likely to miss the first classico of season with a niggling injury on Dec.18, while

But another excellent Benzema display will at least be of some consolation, after he teed up Raphael Varane before scoring his 15th goal this term to put Espanyol out of sight.

Increasingly it looks like the winner of the Clasico will spend the Christmas break first in the table, with the top two pulling away from the likes of Atletico Madrid, who drew again away at Villarreal on Friday night.

Sevilla, in third, are four points behind Real Madrid before they travel to Osasuna on Sunday.

The absence of Hazard and Bale meant Rodrygo came in on the right of the front three while Vinicius Junior was given a rare chance to stake a claim on the left.

Vinicius’ last start came in the defeat to Mallorca on Oct.19 and the 19-year-old, who has been out of favour under Zidane, impressed with a daring and dynamic performance.

He may now be given another outing against Club Brugge in the Champions League on Wednesday, when Madrid are likely to rest key players given their qualification as runners-up is already guaranteed. Vinicius looked eager to make an impact as he fired off an early shot from an acute angle and was then booked for a lunge at Espanyol goalkeeper Diego Lopez.

Espanyol had openings on the counter-attack, the best of them presented to Wu Lei, who was making history as the first ever Chinese player to play at the Bernabeu. His header was saved by Thibaut Courtois.

Madrid’s goal came in the 37th minute and from an unlikely source as Varane stayed up following a corner and Benzema found him in space after bundling through on the edge of the box. With his left foot, Varane stabbed into the far corner.

Vinicius might have made it two after tearing clear on the break but failed to beat Lopez at his near post while shortly after half-time Lopez denied Benzema, who had also broken in behind.

Benzema missed another chance from a Vinicius cross but finally got his goal with 11 minutes left. He threaded in Fede Valverde with a smart reverse pass and then continued his run, before meeting the pull-back and finding the corner.

Meanwhile, Atletico Madrid’s title hopes look to be all, but over after a goalless draw away at Villarreal on Friday raised further doubts about their progress under coach Diego Simeone.

After losing at home to Barcelona last weekend, another slip means Atletico are now five points behind Barca and eight behind Real Madrid in La Liga, despite having played two games more.

It means by the time Simeone’s side head into the Christmas break, the gap could have stretched to double figures and that will be hard to close, especially given they play both Barcelona and Real Madrid away from home in the second half of the season.

Asked if Atletico are too far adrift, Simeone said: “What worries me is winning games and then everything will look different.” But familiar failings in attack proved their undoing at la Ceramica, where Villarreal, who climb to 12th, were fully deserving of their point and could easily have snatched a victory too.

“It’s normal that when you create so many chances without scoring, the players get anxious,” said Simeone. “We have to stay calm.”

Atletico came into the game with 25 points from their first 15 league games, their lowest tally at that stage since Simeone took charge in 2011.

Their remarkable title triumph three years later, not to mention two Champions League finals, means Simeone is still held in high-esteem but after an expensive summer, questions are being asked about the club’s direction of travel.

Simeone has said this is a transition season for the team but there will be no excuses if they fail to make the last 16 of the Champions League on Wednesday. Only a win at home to Lokomotiv Moscow will guarantee their qualification. 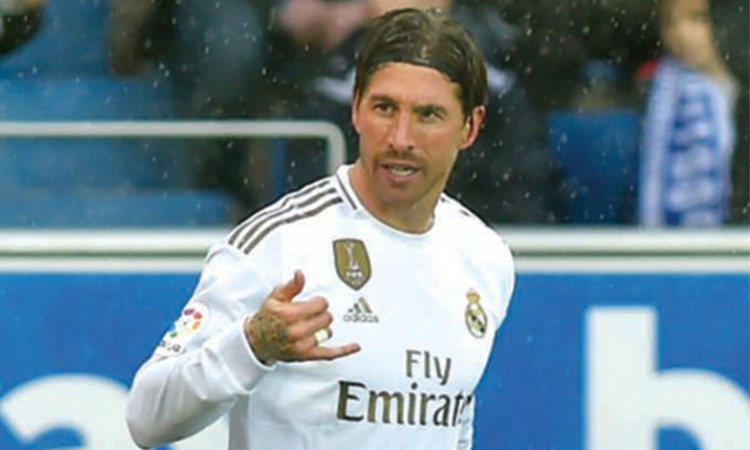 Sergio Ramos scored a goal and conceded a penalty as Real Madrid battled past Alaves on Saturday to go top of La Liga before Sunday’s game between Barcelona and Atletico Madrid. In a later match,