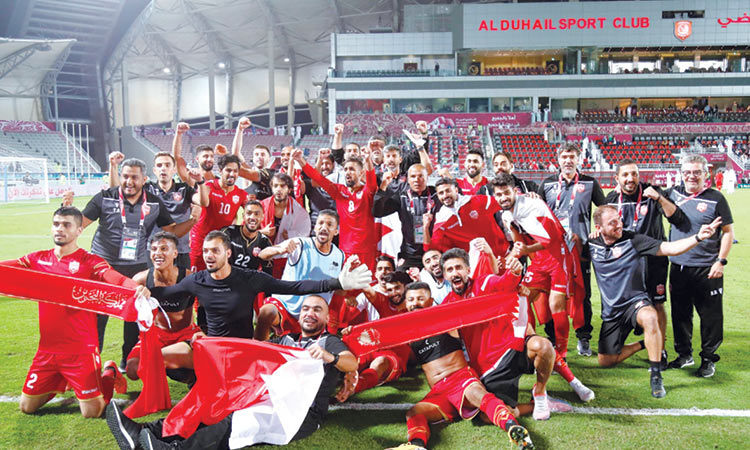 Bahrain’s players celebrate their win over Iraq during their Gulf Cup of Nations semi-final at the Abdullah Bin Khalifa Stadium in Doha on Thursday. Agence France Presse

In a pulsating Gulf Cup of Nations first semi-final at the Abdullah Bin Khalifa Stadium in Doha on Thursday that went down to the wire, Bahrain overcame Iraq 5-3 in the tie-breaker, after the score at the end of extra-time was locked at 2-2.

A victorious Bahrain thus entered the final of the Gulf Nations Cup, where they will meet Saudi Arabia who beat hosts Qatar 1-0 in the second semi-final, courtesy of a 28th minute goal by forward Alhamddan Abdullah.

In the penalty shootout of the Bahrain-Iraq tie, while Mohammed Al Hardan, Jassim Al Shaikh, Mohamed Jasim Marhoon, Thiago Fernandes and Ali Madan were on target, Iraq’s Mohammad Qasem missed his penalty, ending the tie-breaker 5-3 in favour of the Bahrainis.

The game’s stats showed that both teams were evenly-matched, with Bahrain enjoying 53 per cent possession as against Iraq’s 47 per cent. Bahraini players had more shots on target – eight – as against 6 by their Iraqi counterparts.

The semi-final in Doha started at a brisk pace. In the seventh minute of the game, Iraq’s Mohanad Ali Kadhim’s left-footed shot from very close range – following a set-piece situation, bulged the Bahraini net to give Iraq a 1-0 early lead.

However, their lead was short-lived, as in the 14th minute of the game, a pass from Abdulwahab Al Malood following a corner, was headed from the centre of the box into the bottom left corner of the Iraqi net by Abdulla Al Hazaa, thus bringing the score level with Iraq.

Barely four minutes later, Iraq grabbed the lead yet again. This time, Amjed Attwan Kadhim’s through ball was met by Ibrahim Bayesh’s right-footed shot from outside the box, which landed in the centre of the Bahraini goal.

Just when it seemed Iraq would go into half-time with their lead intact, following a set-piece situation, an assist by Ahmed Mubarak saw Mohamed Marhoon’s right-footed shot from the centre of the penalty area enter the Iraqi goal, thus ending the half with honours even at 2-2.

Despite both teams pressing for the winner, the match ended at 2-2 after regulation time. Even 30 minutes of extra time could not break the deadlock and so the inevitable lottery of a penalty shoot-out had to be resorted to decide the first finalists.

In the end, the match, whose result was a fair one, saw Bahrain enter the final.

Following the UAE national football team’s poor start to their World Cup and Asian Cup qualifiers, which preceded their lacklustre campaign at the ongoing 24th Gulf Cup in Doha, the head coach of the team Bert van Marwijk became the first casualty. The UAE Football Association (UAE FA) on Wednesday sacked the Dutchman.

The 67-year-old former midfielder had been appointed as manager of the UAE national football team in March this year following their dismal performance at the 2019 AFC Asian Cup under his predecessor Alberto Zaccheroni.

Van Marwijk had been entrusted with the responsibility of leading the UAE campaign for the ongoing 2022 FIFA World Cup and 2023 AFC Asian Cup qualifiers.

However, after four matches in Group G, the UAE managed to garner just six points, which they did courtesy of a hard-fought opening win away against Malaysia followed by a 5-0 thrashing of Indonesia. However, what followed were shock defeats to Thailand (1-2) and Vietnam (0-1) in November.

With the next qualifier scheduled in March next year, the UAE are in fourth in the five-team group that is being led by Vietnam. Only group winners will advance to the third round of the qualifiers.

In the ongoing Arabian Gulf Cup, the UAE had been clubbed with Yemen, Iraq and hosts Qatar. In their inaugural match, powered by a hat-trick by Ali Mabkhout, they earned full points in a 3-0 win over Yemen, but fell 2-1 to Iraq before being packed off by hosts Qatar 4-2 in the last group match last Sunday.

The UAE FA has assured the nation’s football fans that Van Marwijk’s successor would be appointed shortly. 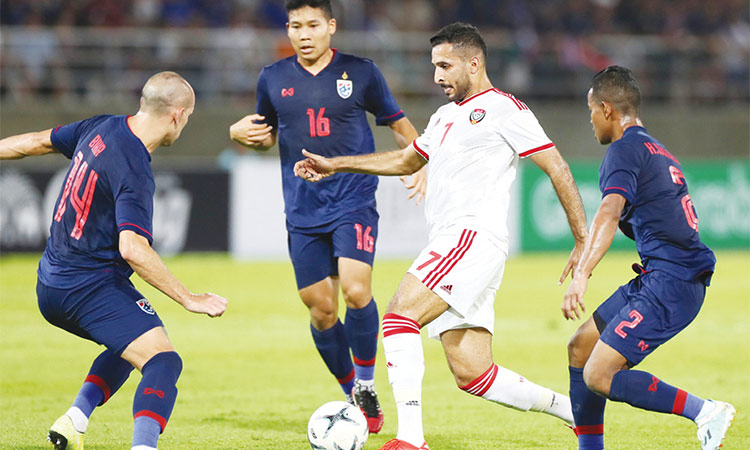 Thailand toppled the UAE off the top of Group G, defeating them 2-1 on Matchday four of the FIFA World Cup Qatar 2022 and AFC Asian Cup China 2023 Asian Qualifiers on Tuesday.