Despite Woods losing some of his aura, he will not be underrated: Els - GulfToday

Despite Woods losing some of his aura, he will not be underrated: Els 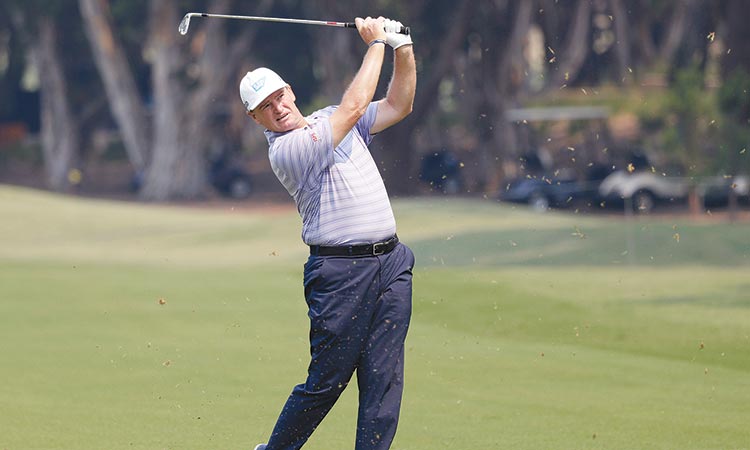 Ernie Els on Wednesday said Tiger Woods has lost some of his aura but the skipper of the International team will not be under-estimating his superstar counterpart at the Presidents Cup next week.

Woods is captaining and playing for the United States at the biennial matchplay showdown at Royal Melbourne, and one of Els’ key decisions will be who plays the 15-time major-winner in the singles on Sunday.

Els said he would decide who faces Woods after seeing how they perform in the three days of fourballs and foursomes, but suggested it would not be a newcomer.

“I don’t want to have a guy feel overwhelmed,” he said in Sydney ahead of the Australian Open, where Els will play from Thursday alongside a handful of his Presidents Cup team.

“I don’t think today he has the same kind of aura he had in the past. It’s different,” added Els, himself a matchplay specialist but will only be captain in Melbourne.

“It’s more of a celebrity kind of aura. But he’s still very competitive. He’s won the Masters and he won in Japan (both this year).  When Tiger is healthy, he can play at a very high level. But he’s not what he used to be consistently. That’s just what age does. But we’ll see when we get to Melbourne.”

The US go into the tournament as heavy favourites, boasting some of the world’s top-ranked players such as Woods, Dustin Johnson and Justin Thomas.

They have won all but one edition in the event’s 25-year history, with Melbourne in 1998 the exception.

Els said he had a good idea of what his pairings would be for the opening day of fourballs next Thursday, without giving anything away.

“There are a couple of pairings that are kind of natural pairings, if you can call it that, but I’m looking at it in a different way, not just a personality way.” he said. “I’m looking at how the guys can really perform together.

Adam Hadwin and Jason Day were Els’ captain’s picks alongside rookies Im Sung-jae and Joaquin Niemann, although Day has since pulled out injured and been replaced by South Korean An Byeong-hun.

Meanwhile, if Els had any concerns about his position as captain of Team International for the Presidents Cup, they were certainly misplaced when it came to Pan.

Pan is preparing for the quadrennial team competition with Els, non-playing vice-captains KJ Choi and Geoff Ogilvy, as well as five of his team mates at the Australian Open.

Asked whether he had made plans to go for a team-bonding dinner with four-times major champion Els while they were in Sydney, the 28-year-old Taiwanese admitted he had not.

“I’m still too shy to ask,” he told reporters on Wednesday.

“He’s like a legend, a leader to me. I was honoured to get to play with him on Tuesday, nine holes with Abraham Ancer and KJ Choi and it was really cool for me, just watching him chipping around the green. It just gave me goose bumps because he’s won so many Majors and when I was little I watched him playing ... so that was a really cool experience for me.”

Pan, who got his first win on the PGA Tour at the Heritage in South Carolina in April, said he was hoping to use the Australian Open, which starts on Thursday, to work particularly on his putting.