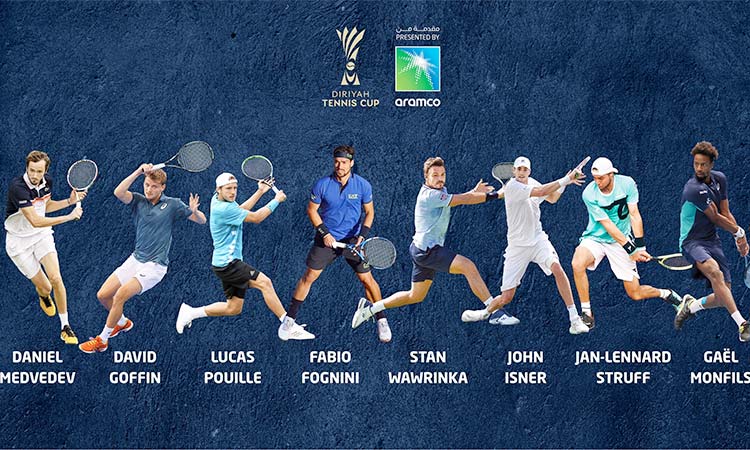 A strong field of top tennis stars will vie for the tops honours at Diriyah Tennis Cup.

The final line-up for the debut Diriyah Tennis Cup presented by Saudi Aramco has been announced – confirming the eight world class players set to step on-court in Saudi Arabia for the first time.

Eight-time ATP Tour winner Gael Monfils is one of the two final additions to be revealed; the ever-exciting Frenchman and world number ten will bring his unique style of play to the three-day event, held as part of the Diriyah Season festival over the weekend of Dec.12-14 on the outskirts of Riyadh.

Joining him in completing the roster for the tournament’s $3million prize purse is German number 2 Jan-Lennard Struff, who is one of the rising stars in tennis with a career-high 35 singles wins in 2019 and a current ATP ranking of 35.

Monfils and Struff are the final two to join the list of eight global tennis superstars representing seven different nationalities. The outdoor hard-court tournament takes place at the purpose-built Diriyah Arena – which is also hosting the world heavyweight title rematch between Andy Ruiz Jr and Anthony Joshua the week before.

World number five Daniil Medvedev of Russia – who has enjoyed a spectacular breakthrough year, reaching six consecutive tournament finals, including the 2019 US Open - is another massive name for fans in Saudi to enjoy.

The 23-year-old is considered one of the new generation of players expected to break the hold of tennis’s big three players — Roger Federer, Novak Djokovic and world number one Rafael Nadal.

Talented world number twelve Fabio Fogini – who became the first Italian to win an ATP Masters 1000 title this year in Monte Carlo – and highly-respected David Goffin of Belgium will also be playing, as will big-serving American John Isner and five-time ATP champion Lucas Pouille of France, an Australian Open semi-finalist earlier this year.

World class music acts, performing after the tennis finishes, will also be revealed soon as part of the Diriyah season.

“It is hugely exciting to confirm our final line-up of world class tennis stars from so many different countries that fans in the Kingdom cannot wait to get close to. The Diriyah Tennis Cup presented by Saudi Aramco will see us reaching new tennis fans and inspiring yet more people to engage in the sport.

“Gael Monfils is one of the biggest entertainers in our sport and the people in Saudi-Arabia will love him for sure.

“Jan-Lennard Struff played the best tennis of his life in 2019. He is the current German No.2 and has a renowned power game. The fans are in for an unmissable weekend of tennis; the first of its kind in Saudi Arabia.”

The Diriyah Season is a month-long celebration of sport, entertainment and culture being held on the outskirts of Riyadh.

The Diriyah Tennis Cup presented by Saudi Aramco is taking place at the 15,000-seater Diriyah Arena being purpose built at the ancient site of the Kingdom’s first capital, known as the home of kings and heroes.

The tournament will happen just a week after the same venue plays host to the Clash On The Dunes, the world heavyweight title fight between Andy Ruiz Jr and Anthony Joshua OBE.

Tickets for all Diriyah Season’s spectacular concerts, events and entertainment are available at www.diriyahseason.sa.