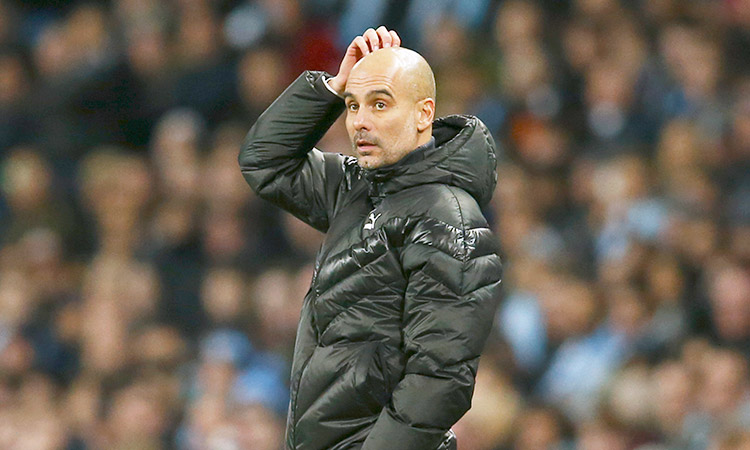 Pep Guardiola says he will not be splashing out in January to revive Manchester City’s flagging Premier League title fortunes despite the yawning gap to leaders Liverpool.

The champions, in third place and trailing Jurgen Klopp’s men by 11 points after 14 matches.

City have gone seven games without a clean sheet, which Guardiola said was not “good enough” and the club have been linked with Leicester City defender Caglar Soyuncu.

But he played down the idea of buying a centre-back when the transfer window re-opens next month. Instead he will keep his faith in Fernandinho and await the return of Aymeric Laporte after a lengthy absence with a knee injury.

Asked if City’s transfer strategy had changed, Guardiola said: “No. I don’t want any players in January.

“If we cannot do it in summer, we cannot do in January. When they come for an incredible opportunity in January for the next four, five, six years, maybe we could think about it, but that is not possible. Normally the players we could think it would be interesting to add something for our squad, they are not going to sell.”

Since losing Laporte in August, and following the exit of captain Vincent Kompany, Guardiola has deployed Fernandinho, usually a holding midfielder, in defence.

And he will turn to the Brazilian again at Turf Moor despite the direct approach of the hosts and aerial and physical threat of Burnley forward pair Ashley Barnes and Chris Wood.

“Fernandinho is not the reason why we win or lose. When we beat Chelsea, everyone said how fantastic Fernandinho was,” said Guardiola.

“When we don’t win it’s because of Fernandinho. It will be my decision. I like him in that position because of the build-up for the fast, for the long balls, many things.”

City will be without the suspended Ilkay Gundogan in midfield and striker Sergio Aguero, the matchwinner at Burnley last season, with a thigh injury that will also rule him out of Saturday’s manchester derby.

City have won just one of their past five games in all competitions but England defender John Stones believes leaders Liverpool will now face added pressure to stay at the top.

“It’s very difficult to be out in front and you can sometimes be complacent and not do things you should do. That’s when you can slip up,” he said.