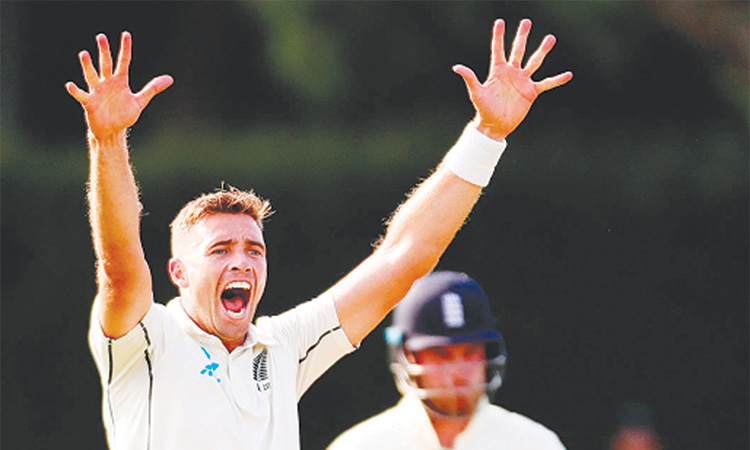 New Zealand’s Tim Southee (left) celebrates after taking the wicket of England’s Dom Sibley on day two of the second Test at Seddon Park in Hamilton on Saturday. Agence France-Presse

Tim Southee and Matt Henry removed both England openers as New Zealand reduced the tourists to 39-2 and took control of the second Test by the close of play on the second day at Seddon Park in Hamilton on Saturday.

New Zealand had been dismissed for 375 about an hour after tea and hold a 336-run lead heading into the third day of a match that England need to win to level the two-Test series.

Rory Burns was on 24 at the close of play, having survived two dropped catches, with captain Joe Root on six and looking uncomfortable at the crease as he battles with a precipitous drop in form over the last year.

Opening batsman Dom Sibley was trapped in front by Southee for four to leave the tourists 11-1 before Joe Denly (four) was snapped up by wicketkeeper BJ Watling with a superb low catch off Henry to reduce them further to 24-2.

England could have been even further in the mire at stumps with Burns dropped on 10 by Ross Taylor at first slip off Henry and again, from a more difficult chance, on 19 by Jeet Raval at midwicket off Southee.

England’s pace attack had earlier dragged their side back into the game with a fiery spell of short-pitched bowling at New Zealand’s tail after Stuart Broad had broken a 124-run stand between debutant Daryl Mitchell (73) and Watling (55).

“When I was sitting on zero I wasn’t that calm,” Mitchell said. “So it was nice to get a run and get started and the more time you spend out there the easier it does get.

“But England bowled very well. They were very patient at times and built pressure and asked good questions.

“We just had to grind it out for a period there and I was lucky enough to get a few runs.”

New Zealand had been well set at 315-5 heading into tea before Broad removed first Test man-of-the-match Watling with the penultimate ball before the break.

Broad then had Mitchell caught at deep fine leg by Jofra Archer about 20 minutes after play resumed in the final session.

With the hosts’ bowlers prepared to take on the short-pitched deliveries, England quickly wrapped up the innings as mistimed shots from New Zealand’s batsmen ended up in the hands of the boundary fielders.

The last five wickets fell for just 60 runs and Broad finished the innings with 4-73.

Broad, England’s chief wicket taker with four for 73, said there was little in the pitch to assist the bowlers and two good centuries should be enough to set them up for a series-levelling win.

New Zealand won the first match at Bay Oval in Mt. Maunganui by an innings and 65-runs.

Scoreboard at stumps on day two of the second Test between New Zealand and England in Hamilton on Saturday: