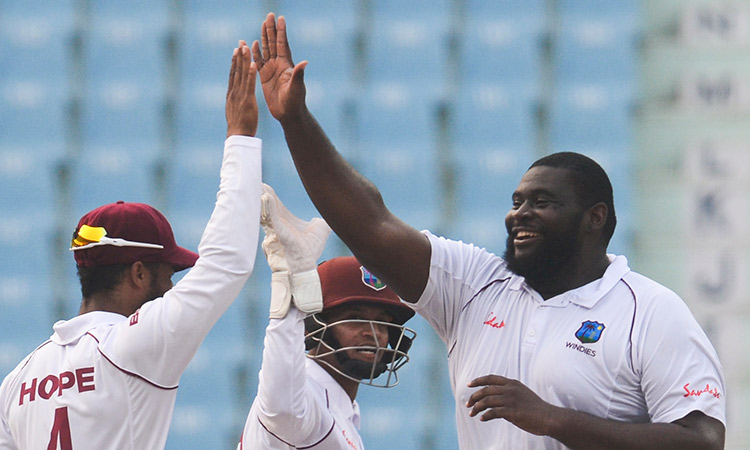 West Indies' Rahkeem Cornwall (R) celebrates with teammates after taking a wicket during their Test match against Afghanistan in Lucknow, India, on Thursday. Rohit Umrao / AFP

Cornwall took a match haul of 10 wickets as the West Indies bowled out Afghanistan for 120 on day three and reached their target of 31 to seal the win in just over an hour of the first session in Lucknow.

It was a reality check for Afghanistan, who were awarded Test status in 2017 and won their first two victories in the five-day format earlier this year.

Skipper Jason Holder claimed all three Afghan wickets to fall in the morning as the Windies needed just 7.1 overs to see off Afghanistan after they resumed the day on 109 for seven.

"Really important win. We had a tough series against India. Was important to finish the year well," said Holder, whose team suffered a 2-0 whitewash against India at home in August and September.

"Very pleasing to see new guys come in and take the opportunity. Shamarh (Brooks) did that. He scored a fifty in the last innings and followed it with a hundred here. And then Rahkeem getting seven in the first innings, in just his second Test, is amazing." John Campbell made an unbeaten 19 and sealed the win with a boundary after losing his opening partner Kraigg Brathwaite for eight off Amir Hamza. 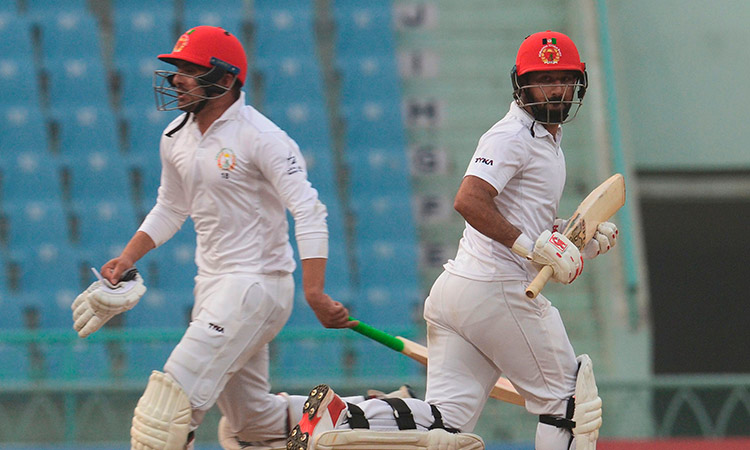 But it was the Cornwall-led spin attack that dismantled Afghanistan on day two as they collapsed from 53 for no loss to 109-7.

The 26-year-old Cornwall, who hits about 140 kilograms (308 pounds) on the scales and is 1.96 metres (six feet five inches) tall, and Roston Chase took three wickets each in the second innings.

Opener Javed Ahmadi top-scored with 62 before becoming the final wicket to fall on day two, which earlier witnessed the West Indies take a lead of 90 as they were 277 all out.

Shamarh Brooks made 111 − his maiden Test century − to extend West Indies' dominance after the minnows were bowled out for 187 on the opening day, largely thanks to Cornwall's 7-75.

Left-arm spinner Amir remained the only bright spot for Afghanistan with his five-wicket haul on Test debut as he returned figures of 5-74.

"I think, what I've seen, we've been struggling in the longer formats. Especially in batting. That's the only area we need to improve," said Afghanistan skipper Rashid Khan.

"Once we do that, we can trouble good sides. Still early days in our Test careers, only our fourth game, against an experienced Windies. Hope to recover from our mistakes." Afghanistan, who lost their opening Test in India inside two days, claimed their maiden victory in March when they beat fellow newcomers Ireland before defeating Bangladesh in September.

Most recently, Rashid's team clinched a 2-1 Twenty20 series win over the West Indies after being swept 3-0 in the preceding one-day internationals.

India and New Zealand are the only teams still unbeaten in the Cricket World Cup and both are in action on Saturday as the tournament moves into its 24th day. India takes on Afghanistan at the Rose Bowl 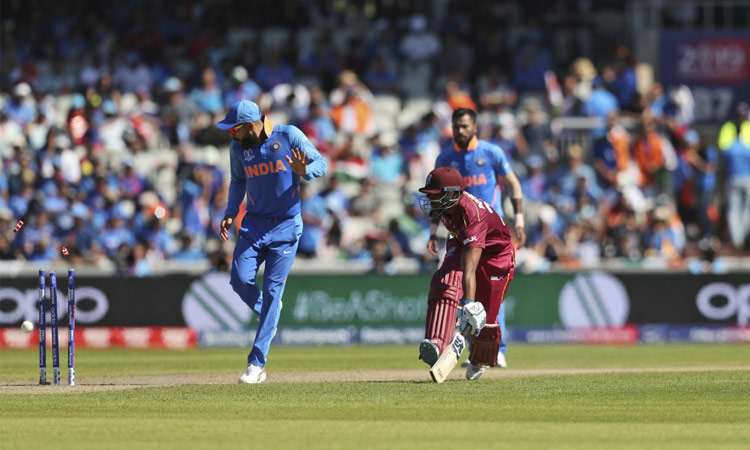 Skipper Virat Kohli's gritty half-century and an incisive bowling performance powered India to a comprehensive 125-run win over West Indies on Thursday, all but assuring them of a spot in the World Cup semi-finals.