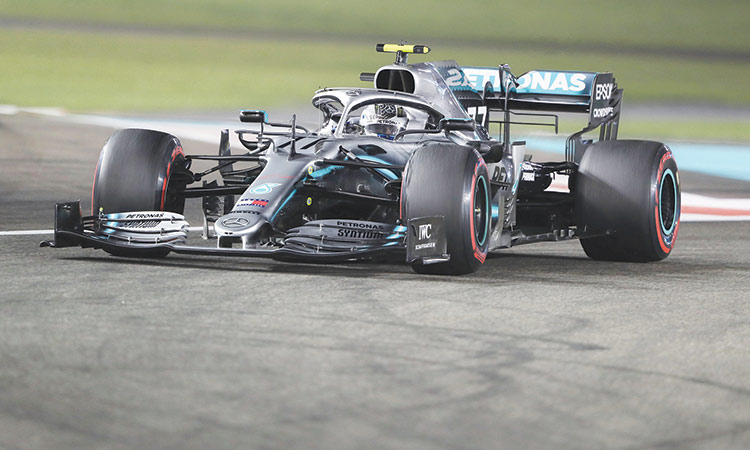 Mercedes driver Valtteri Bottas steers his car during the second free practice at the Yas Marina racetrack in Abu Dhabi.

The Finn, who was also fastest in the opening session, improved on his afternoon benchmark with a lap of one minute 36.256 seconds under the Yas Marina floodlights.

The 30-year-old was 0.310 seconds quicker than Hamilton, who was third in the morning, and He looked very strong around the 5.5km layout.

Bottas is set to start Sunday’s race from the back of the grid, however, with the Finn penalised for exceeding his engine allocation.

The championship runner-up’s session was far from flawless, with Bottas and Haas driver Romain Grosjean in an unusual collision for a Friday when nothing is at stake.

The Mercedes suffered a broken front wing after the Finn tried to dive through on the inside of the Frenchman, whose car was also damaged.

Charles Leclerc, seventh in the first session, ended the day with the third fastest time ahead of Ferrari team mate Sebastian Vettel.

The 22-year-old Monegasque suffered a scare during the session, clouting the same barriers that Vettel had spun into only hours earlier.

The German, who collided with Leclerc in an incident that put both Ferraris out of the last race in Brazil, had been fifth in the morning despite the smash that ended his session.

Max Verstappen, winner two weeks ago in Brazil, dropped from second to fifth for Red Bull ahead of Thai team-mate Alexander Albon.

Grosjean was seventh ahead of Racing Point’s Sergio Perez. Daniil Kvyat and Pierre Gasly rounded out the top 10 for Toro Rosso.

Both of Friday’s sessions were interrupted by red flags with the collision between Bottas and Grosjean halting track action briefly in the evening.

An engine failure for Australian Daniel Ricciardo that saw his Renault spit oil and fire with Gasly close behind was the day’s first interruption.

Vettel’s spin into the barriers also halted the session.

Mercedes have won every race in Abu Dhabi since 2014 and Hamilton, who wrapped up his sixth title two races ago in Austin, has won at Yas Marina a record four times.

Meanwhile, Hamilton reflected on the cost of chasing Formula One success and the high personal toll exacted by the sport after Mercedes team mate Bottas announced on Thursday he was getting divorced.

Bottas, 30, had earlier announced in a twitter post his split from wife Emilia, an Olympic swimmer, because of the challenges that came with his “career and life situation.”

“It may be slightly different in that we are travelling as much as we are, and you are just away for crazy amounts of time, so that’s probably an additional weight load that makes it really, really tough to hold down a good relationship.”

The 34-year-old Briton, who is not married, last month became only the second Formula One driver to win a sixth world championship.

Formula One visits 21 countries, with the calendar expanding to a record 22 events next year.

Nico Rosberg, Hamilton’s former team mate, has spoken of how much his family suffered as he focussed single-mindedly on beating the Briton to the 2016 title.

Hamilton acknowledged some drivers, like Ferrari’s Vettel who delayed his arrival into Abu Dhabi because of the birth of his third child, had found a life balance but he admitted it was something he found hard.

“There are many athletes who have generally happy lives in the background,” he said.

“But I for one also find that incredibly difficult, with your goal to be as competitive as you can be, ultimately you want to be 100 per cent committed because you never want to be any less committed than the person next to you. 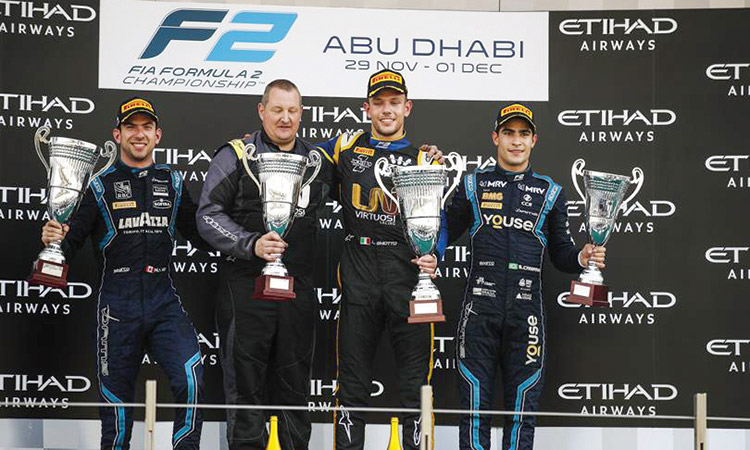 Luca Ghiotto eased to victory in the final Formula 2 sprint race of 2019 at Yas Marina Circuit on Sunday. The Italian made the move on early leader Guiliano Alesi into Turn 11