Delaney out as Dortmund take on bottom side Paderborn - GulfToday

Delaney out as Dortmund take on bottom side Paderborn 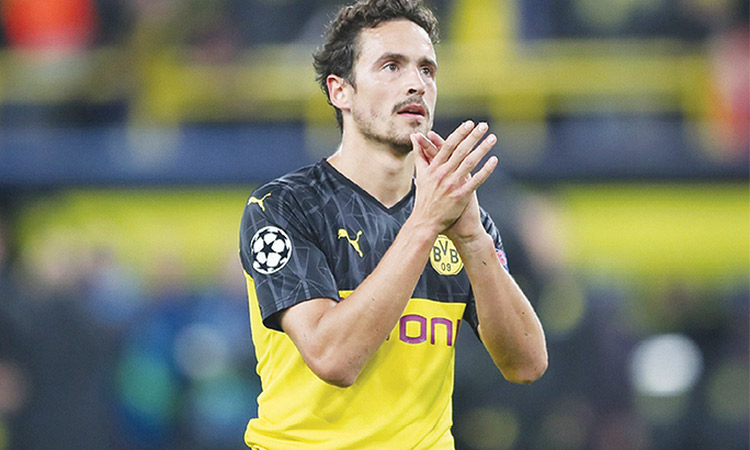 Borussia Dortmund’s Thomas Delaney has been ruled out for the rest of the year after picking an injury in a Euro qualifier against Ireland. Reuters

Borussia Dortmund’s Thomas Delaney has been ruled out of the squad until January after being injured as the Bundesliga’s giants prepare to take on strugglers Paderborn on Friday.

He was injured while on national duty for Denmark against Ireland during a Euro qualifier match, that ended in 1-1 draw.

He is expected to return to action after the winter break in January after nursing his injury, so that id doest not aggravate.

There is also a question mark as to whether club captain Marco Reus will recover in time from an ankle injury.

Dortmund, who were defeated 4-0 to Bayern at the Allianz Arena ten days ago, will look to bounce back against bottom side Paderborn to close the six-point gap behind leaders Moenchengladbach.

They also need to boost confidence before playing Barcelona away next Wednesday with the Spanish top of their Champions League group by just a point from Dortmund.

Favre said the Bayern defeat was “hard to digest” as his team created just two shots on goal to the hosts’ 18 as Munich striker Robert Lewandowski scored twice against his former club.

“There are a lot of things we have to do better and I don’t want to talk about it (the Bayern defeat) anymore,” said Favre in Wednesday’s press conference.

“The post-match analysis was hard, but now we’re looking forward. We must have respect for them, but against Paderborn, we know what we have to do.”

Meanwhiel, Moenchengladbach hope the international break has not slowed their momentum as they prepare to face Union Berlin on Saturday after their surprise run to the top of the Bundesliga.

Gladbach are enjoying their best season since they last won the Bundesliga title in 1977 and have won eight of their 11 games so far, two more than any other team.

They are top on 25 points, four ahead of RB Leipzig and champions Bayern Munich, and travel to Berlin on Saturday as the league resumes.

Key to the Foals’ success so far has been their extremely solid and disciplined backline that has let in just 11 goals, fewer than any other title rival, and a prolific frontline that includes revelation Marcus Thuram.

The 22-year-old son of French World Cup winner Lilian Thuram has so far netted five times and set up another five goals in his first Bundesliga season, with Gladbach boasting the second best goal tally having netted more than two goals per game.

Added to the recipe is new coach Marco Rose’s tactical nous that has given Gladbach a winning edge and growing confidence.