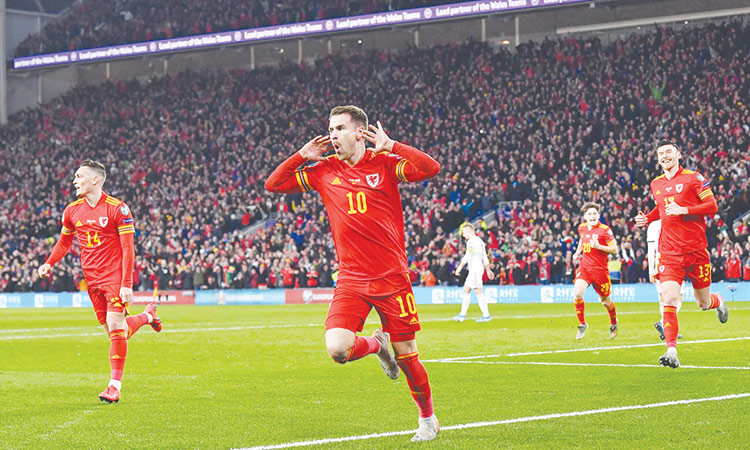 Wales’ Aaron Ramsey celebrates after scoring a goal against Hungary during their Group E Euro 2020 qualifier in Cardiff on Tuesday. Agence France-Presse

Aaron Ramsey sent Wales to Euro 2020 with a brace to give them a 2-0 win over Hungary and a spot in next summer’s finals, while Belgium completed their perfect qualifying campaign with a mauling of Cyprus.

Juventus midfielder Ramsey hit his decisive double either side of half-time at the Cardiff City Stadium to ensure that Ryan Giggs’s side leapfrogged on Tuesday’s opponents into second place in Group E to snatch a spot at the multi-host tournament.

Wales also held off Slovakia, who beat Azerbaijan 2-0 but finished a point behind in third thanks to their defeat at group winners Croatia in the previous round of matches.

Ramsey’s match-winning display came in his first start of qualifying and capped a superb performance that belied a characteristically injury-dogged season that term in Serie A.

“I missed a lot of this campaign but it was all worthwhile to chip in with a couple of goals tonight,” Ramsey told Sky Sports.

“We had the time of our lives in France (at Euro 2016). We inspired a nation last time out so we wanted to do it again.”

The 28-year-old, who played 30 minutes as a substitute in Saturday’s win in Azerbaijan, made an immediate impact by charging into the box to meet Gareth Bale’s inch-perfect cross to settle the home side’s nerves on 15 minutes.

There was no way back for the visitors once Ramsey controlled Kieffer Moore’s knockdown to smash home from close range two minutes into the second half.

However Wales also had to thank goalkeeper Wayne Hennessey for keeping the scores level just before the break after an incredible double save to deny first Dominik Szoboszlai and then Roland Sallai as the home fans held their breath.

The win gave Wales the final automatic place, with 20 teams ready to contest the finals and another four spots set to be decided via the playoffs in March next year.

One of the favourites for the tournament which kicks off in Rome on June 12, Belgium, made it a perfect 10 wins from 10 with a 6-1 thrashing of Cyprus that saw Christian Benteke score twice.

The Crystal Palace forward is yet to score in the Premier League but opened Belgium’s account in the 16th minute with a tap-in two minutes after Nicholas Ioannou stunned the Group I winners with a superb run and shot.

He rounded off the scoring in the 68th minute when he collected a neat through ball from Kevin De Bruyne — who also scored twice — and slotted past Neofytos Michael.

Tuesday’s stroll means Roberto Martinez’s side finish the qualifying phase as top scorers with a whopping 40 goals, with an average of four goals a game.

Russia, who finished two points behind Belgium, thumped San Marino 5-0 in one of a host of dead rubbers.

Germany and the Netherlands thumped Northern Ireland and Belarus to close their campaigns in style.

Serge Gnabry said Germany were heading to the Euros in a positive mood after hitting a hat-trick that sank the Northern Irish 6-1 and gave them top spot in Group C.

“We are playing some very, very good football,” said Gnabry, who came off to a standing ovation on 80 minutes.

“We are going to the finals confident and with a good run behind us. The team is young, but we’re all having a lot of fun.”

Georginio Wijnaldum meanwhile made another stand against racism as he also scored three times in the Netherlands’ 5-0 crushing of Belarus.

And after opening the scoring in the sixth minute he and Frenkie de Jong joined on the sidelines to bring their arms together to draw attention to their different skin colour.

Myron Boadu made it a night to remember by scoring on his international debut to make it five three minutes from the end, collecting Kevin Strootman’s pass before colly slotting home.

“This is obviously a dream come true, to play for the national team and score on your debut,” said the 18-year-old.

“I can’t claim that I should be in the squad for the Euro finals, I just have to show what I can do.”